The patronage, which has been given to The Duchess by Her Majesty The Queen, closely aligns with Her Royal Highness’ long-standing passion for sport and the lifelong benefits it can provide, both within our communities and on an individual level. The RFL was established in 1895 and is the national body for Rugby League in the UK, a game for 13 players to a team.

The Princess talked to the England and Papua New Guinea men’s teams before the match. The Princess was there to watch the Quarter Final match in which England’s men’s squad faces off against Papua New Guinea while the women’s team competed against Canada. This was the first time Catherine attended any Rugby league match since becoming the patron.

Ahead of the match, Simon Johnson, chair of the Rugby League, said, ‘We will be delighted and honoured to welcome the Princess of Wales for the first time as the RFL’s Royal Patron. With both our England Women and Men’s teams playing important World Cup matches on Saturday, her presence will enhance a special occasion for our sport, for the World Cup and for the famous rugby league town of Wigan.’

A special good luck message for the #RedRoses from our patron The Princess of Wales.
#TeamDream | @KensingtonRoyal pic.twitter.com/XsI5loL6U0

Last month, The Princess of Wales released a video message to wish the Rugby teams the best ahead of the world cup. Catherine said, “Hello everyone. I wanted to take a moment to wish the Red Roses all the very best of luck for the rugby world cup in New Zealand… Good luck with the weeks ahead. I’ll be setting my alarm clock early to cheer you on all the way.”

In Wigan, after meeting the players on the pitch The Princess of Wales joined a minute of non-silence, held to mark the tournament’s Movember Mental Fitness Match Day. Since 2003, Movember has funded more than 1,250 men’s health projects around the world, challenging the status quo, shaking up men’s health research and transforming the way health services reach and support men.

She also spoke to representatives from groups who have played a part in the tournament’s social impact programme, which was set up to provide a positive impact on the host towns and cities. The Children’s Princess also met with young kids who arrived with the Movember charity.

This year, the Rugby League World Cup has announced that the men’s, women’s and wheelchair competitions will all be staged alongside each other. Ahead of kick-off, the Princess met key representatives of the World Cup’s Social Impact programme – which has secured over £25m investment since its launch in 2018 to increase opportunities for players from different backgrounds and promote positive mental health.

During halftime, Catherine met members of the England Women’s Rugby League team following their match against Canada. The men’s team emerged as the winner of the match with a score of 46-6 and headed towards the semi-finals.

How unreal that me and @Jodie_cunny got to sit with HRH Princess of Wales for the second half of ENG vs PNG! 🤩🙏🏼 So lovely to meet @KensingtonRoyal and chat about our amazing sport RUGBY LEAGUE 🙌🏼❤️🏴󠁧󠁢󠁥󠁮󠁧󠁿 Thank you to @RLWC2021 and @TheRFL for the incredible opportunities 🏉🙏🏼 pic.twitter.com/OJkG9WXbMV

The long coat featured the classic tailored silhouette with black metal embossed button at the front and cuffs with slightly padded shoulders. The coat could be a custom version of Alexander McQueen’s Fall 2020-2021 Golden button-detailed wool-blend coat.

This was the third time we saw Catherine wearing the coat. She again wore the coat in December 2020 during the Royal Train tour. 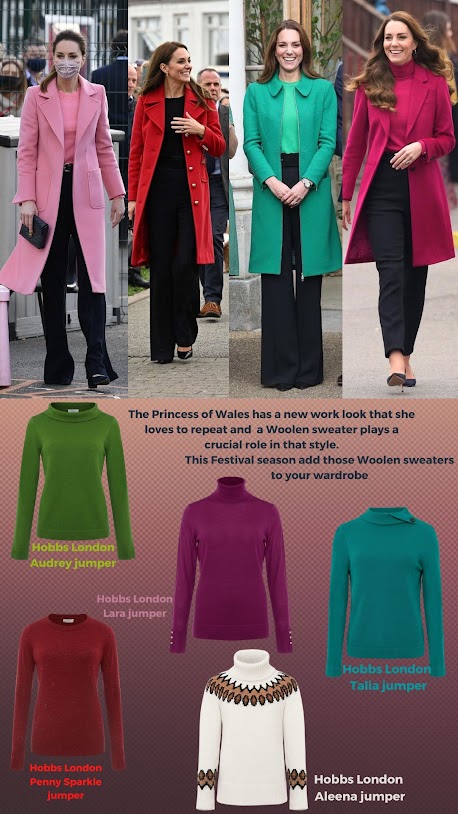 We found some brilliant pieces at Hobbs London that offer a variety of designs within a reasonable budget limit and of course, Hobbs London has a prominent presence in Catherine’s wardrobe too.

Update: The Princess of Wales wore Co Pleated Elastic Waist Skirt in Stretch Crepe. Thanks to Laura on Twitter for the id. 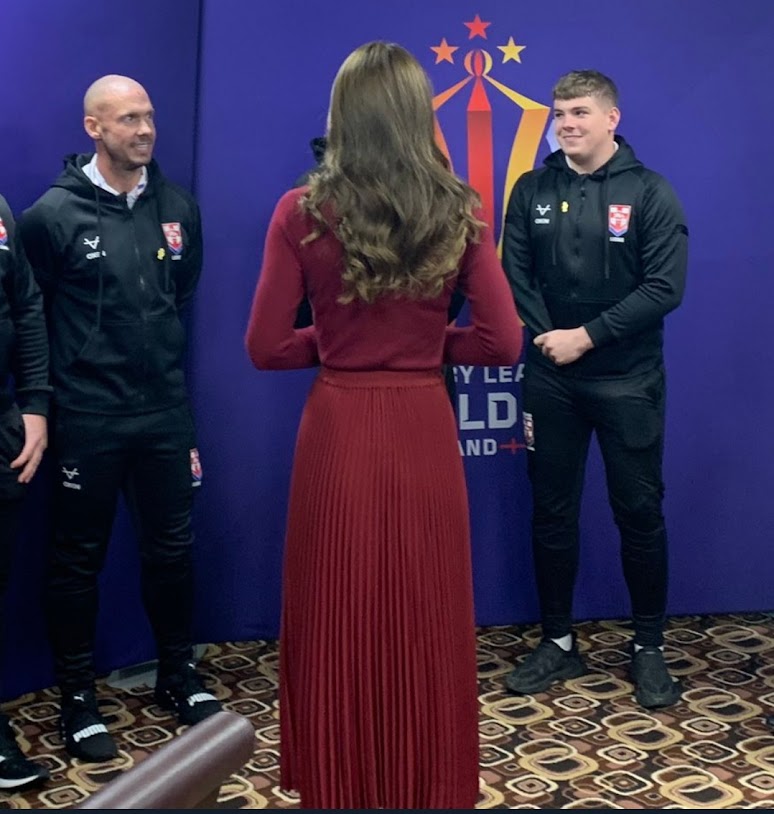 The Princess teamed up the outfit with her Annoushka Baroque Pearl Drops with Kiki McDonough Hoops.

Update: The Princess of Wales was wearing a customised version of Gianvito Rossi Glen boots. Thanks to Kate Middleton Style and Middleton Maven on Twitter for the id and confirmation.

A look at the Glen boots.

The Princess was supporting a poppy to mark Remembrance week. Next week, British Royal Family will be attending various events and Remembrance Sunday service.