2 Days after the death of Her Majesty Queen Elizabeth II, we saw the first glimpse of the Royal Pomp and Pageantry. Day 2 of Carolean showed us the Royal Mantra of ‘The Show must go on”. From Pomp and Pageantry to meeting with the public who gathered outside the various Royal houses, it turned out to be a busy day. (Once again the events discussed below are in descending order).

In the evening, Buckingham Palace announced the details of The late Queen Elizabeth II’s funeral. The funeral will take place at Westminster Abbey on Monday 19th September at 1100hrs BST.  Prior to the State Funeral, The Queen will Lie-in-State in Westminster Hall for four days, to allow the public to pay their respects.

The Procession will travel via Queen’s Gardens, The Mall, Horse Guards and Horse Guards Arch, Whitehall, Parliament Street, Parliament Square, and New Palace Yard. After the Coffin arrives at Westminster Hall, The Archbishop of Canterbury will conduct a short service assisted by The Very Reverend Dr. David Hoyle, Dean of Westminster, and attended by The King and Members of the Royal Family, after which the Lying-in-State will begin.

During the Lying-in-State, members of the public will have the opportunity to visit Westminster Hall to pay their respects to The Queen.

The plan has always been for the Queen to be privately buried alongside her father, King George VI, mother, Queen Elizabeth the Queen Mother, and sister, Princess Margaret. Her dearest Philip will be brought from the Royal Vault and buried with his wife of 73 years, reunited again.

I believe once #Philip was gone #Elizabeth was so heart broken that she just couldn’t go on❤️❤️.

She gave her best till her last day.

Rest in peace Your Majesty and Your Royal Highness🕊🕊 pic.twitter.com/VkT0rS8lMF

In the evening, The King and Queen returned to Clarence House -their official residence as The Prince and Princess of Wales. The couple stepped out to meet the public gathered outside Clarence House and thanked them for their love and support. It was the couple’s first return to their former home since they ascended to the throne. 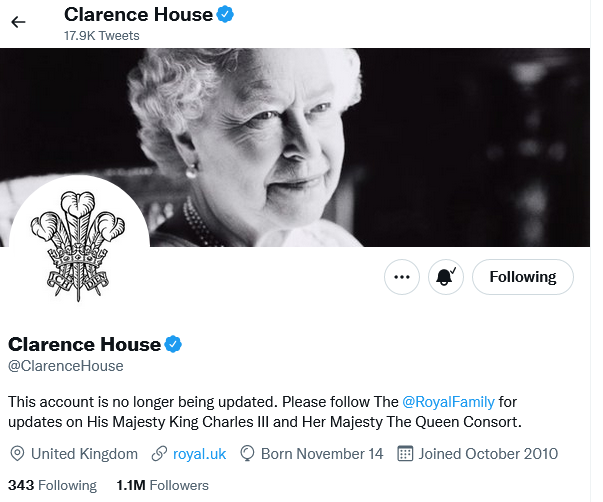 In the afternoon, we received a lovely surprise from The Prince and Princess of Wales.

The Royal couple joined by The Duke and Duchess of Sussex drove to the gates of Windsor Castle and met with the thousands of public members gathered outside the castle.

They spent 40 minutes there talking to the well-wishers, receiving flowers, and thanking them for their support and love. It turned out to be a lovely evening despite the somber mood of the nation.

This afternoon at Buckingham Palace, His Majesty The King, accompanied by Her Majesty The Queen Consort, held Audiences with the Archbishop of Canterbury, the Prime Minister and Members of the Cabinet, and Opposition Party Leaders. pic.twitter.com/3hHWGHyO4E

The King and The Queen held their first audiences at the Palace during which they met the Prime Minister, The Cabinet, The opposition Leaders, and the Archbishop of Canterbury

Members of The Queen’s family view the many floral tributes that have been left in memory of Her Majesty at Balmoral. pic.twitter.com/T5MBcl0hpy

In Scotland, Members of the Royal Family stepped out to attend a church service and to view the flowers left by the well-wishers outside Balmoral Castle.

The Duke of York, Princess Beatrice, Princess Eugenie, The Earl and Countess of Wessex, Lady Louise, Princess Anne, Sir Tim Laurence, and Zara Phillips met with the locals gathered outside the church and Palace and viewed the condolences left in the memory of The late Queen.

The first act was the meeting of the ancient Accession Council at St. Jame’s Palace to proclaim Charles as the new King of The United Kingdom and realms.  The Accession Council met after 70 years. The last meeting was in 1952.

A video of the Accession Council Meeting.

Earlier in the morning The Prince of Wales and The Queen Consort participated in the first part of the Accession Council meeting with the Prime Minister, the Archbishop of Canterbury, the Archbishop of York, and the Earl Marshall.

The Accession council has approximately 700 members but given the small space of the Picture Gallery of St. James’ Palace, only 200 of the most senior members were present that included the Current Prime Minister Liz Truss, and 6 Former Prime Ministers.

In the first part, formal announcements of the death of the Monarch and proclaiming the succession of the new Sovereign were made and certain consequential Orders of Council mainly related to the Proclamation were insured. Monarch does not attend the first part. The Prince of Wales and The Queen Consort were present.

In the second part, King Charles III joined the accession council where after formally declaring the demise of his beloved mother Queen Elizabeth II, he made his declaration and took the Oath relating to the security of the Church of Scotland. The Transcript of King Charles III’s declaration is as follows:

My lords, ladies, and gentlemen.

It is my most sorrowful duty to announce to you the death of my beloved mother, the queen.

I know how deeply you, the entire nation — and I think I may say the whole world — sympathize with me in the irreparable loss we have all suffered. It is the greatest consolation to me to know of the sympathy expressed by so many to my sister and brothers and that such overwhelming affection and support should be extended to our whole family in our loss.

To all of us as a family, as to this kingdom and the wider family of nations of which it is a part, my mother gave an example of lifelong love and of selfless service. My mother’s reign was unequaled in its duration, its dedication, and its devotion. Even as we grieve, we give thanks for this most faithful life.

I am deeply aware of this great inheritance and of the duties and heavy responsibilities of sovereignty that have now passed to me. In taking up these responsibilities, I shall strive to follow the inspiring example I have been set in upholding constitutional government and to seek the peace, harmony, and prosperity of the peoples of these islands and of the Commonwealth realms and territories throughout the world.

In this purpose, I know that I shall be upheld by the affection and loyalty of the peoples whose sovereign I have been called upon to be and that in the discharge of these duties I will be guided by the counsel of their elected parliaments. In all this, I am profoundly encouraged by the constant support of my beloved wife.

I take this opportunity to confirm my willingness and intention to continue the tradition of surrendering the hereditary revenues, including the crown estate, to my government for the benefit of all, in return for the sovereign grant, which supports my official duties as head of state and head of the nation.

And in carrying out the heavy task that has been laid upon me, and to which I now dedicate what remains to me of my life, I pray for the guidance and help of almighty God.

Tomorrow there will be Proclamations in Edinburgh, Cardiff and Belfast.

After the Accession Council, David White, the Garter King of Arms, accompanied by the Earl Marshal (who is responsible for the ceremonial arrangements relating to the Proclamation), other Officers of Arms, and the Sergeants at Arms, read the Proclamation from the Balcony above Friary Court, St James’s Palace.

The UK Armed Forces have performed gun salutes across the country today to mark His Majesty The King’s Principal Proclamation. See the gun salutes from Cardiff to London and Royal Navy ships at sea. pic.twitter.com/ZCRr8QSJyd

To mark the proclamation of His Majesty King Charles III, at 11am BST today @HACRegiment began firing a 62-round gun salute from the Tower of London. pic.twitter.com/gvllOUWITo

Gun salutes at Hyde Park, at the Tower of London, and at military sites around the U.Kcoincided with the Proclamation.

Prince Michael of Kent, Birgitte, Duchess of Gloucester, and Prince Edward, Duke of Kent sit together as the Principal Proclamation is read from the balcony

Approximately 800 public members were also allowed in the courtyard of the St. James Palace to hear the public proclamation of The King from the balcony of the St. James’s Palace. Three cheers were made for the new King.  The new king formally approved a series of orders, including one declaring the day of his mother’s funeral as a public holiday.

Crowds gathered at the Royal Exchange today for the City Proclamation, the historic ceremony at which His Majesty King Charles III was proclaimed as the heir to the late Queen Elizabeth II. pic.twitter.com/ZifKx5Gy0J

Day 1 ended with us having a new The Prince and Princess of Wales.