On the morning of September 08th, 2022 no one had thought that they would be witnessing a historical change. Her Majesty Queen Elizabeth II passed away at the age of 96 at Balmoral Castle on September 08, 2022. Announcing the death, The Palace said,

In the afternoon Buckingham Palace released a statement that read, “Following further evaluation this morning, The Queen’s doctors are concerned for Her Majesty’s health and have recommended she remain under medical supervision. The Queen remains comfortable and at Balmoral.“

Following the announcement, Prince Charles and his wife The Duchess of Cornwall headed for the Balmoral from Dumfries house. From London, The Duke of Cambridge, The Duke of York, The Earl, and the Countess of Wessex traveled together to be with the Queen.  Princess Anne was already in Scotland.

In the afternoon when Queen Elizabeth II left the world peacefully, her eldest son the 73-years old Prince Charles of Wales ascended to the throne and become King Charles III making his wife Camilla, The Queen Consort. As expected Charles decides to keep his Christian name and now will be known as King Charles III. A very wise decision.

The first message from His Majesty The King. After 7 decades, the country had a new Monarch –  A King.

Charles was not the only one who had new titles. Prince William and his wife Catherine, The Duke and Duchess of Cambridge, now also hold the title of Duke of Cornwall and Duke of Rothsay. William is now the heir apparent and first in line to the British Throne. 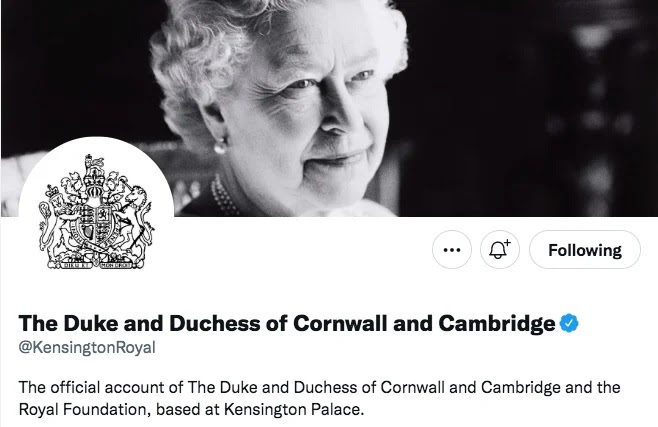 Kensington Palace changed the Social Media account details to The Duke and Duchess of Cornwall and Cambridge.

Kensington Palace confirmed that until the King bestows the title of Prince and Princess of Wales on William and Catherine they will be known as The Duke and Duchess of Cornwall and Cambridge. As the Duke of Cornwall, now William will be receiving the income from the Duchy of Cornwall – that means more responsibilities, big staff, and more freedom. William and Catherine just moved to a new home in Windsor grounds – Adelaide Cottage to provide their children a more private childhood. Now with The Queen’s demise how their plans will pan out, only time will tell.

At this moment, The United Kingdom does not have any Prince and Princess of Wales.

The last Prince and Princess of Wales just became The King and Queen Consort this evening. https://t.co/pnSTWAMP1Y

As of this moment, the United Kingdom does not have any Prince and Princess of Wales. The heir apparently holds the title of Prince of Wales but it is not automatic. The King will need to invest Prince William with the title after his own Coronation.  The United Nation and The Realms will be going through many symbolic and constitutional changes as the Elizabethan era is now over. Everything that was being done in The Queen’s name now would be The King’s.

Ahead of the funeral, there are many formal ceremonies that need to take place. The first one would be the Proclamation of  Charles as the King. This usually happens at St James’s Palace in London, in front of a ceremonial body known as the Accession Council. The council is made up of members of the Privy Council – a group of senior MPs, past and present, and peers – as well as some senior civil servants, Commonwealth high commissioners, and the Lord Mayor of London.

Then King Charles III will meet The Accession Council and Privy Council on Saturday where he will make his first declaration. After which a public proclamation will be made by a fanfare of trumpeters from the balcony of St. James Palace called Garter King of Arms. And After 72 years the first time “God Save, The King” will be played. Gun salutes will be fired in Hyde Park, the Tower of London, and from naval ships, and the proclamation announcing Charles as the King will be read in Edinburgh, Cardiff, and Belfast.

Just within 24 hours of losing his biggest champion, the newly proclaimed King will be sitting through formal meetings and approving ceremonies that are essential for the Crown, Country, and Commonwealth instead of mourning the loss of his mother privately. The Duty always comes first – a royal mantra he learned from his Mother. His Majesty will be recording his first broadcast today which will be released later in the evening. The formal Coronation of King Charles III will not take place any time soon. Depending upon how big or small the coronation ceremony will be, the dates and details will be announced in the due course.

Despite heavy rain, even some thunder and that it’s nighttime, there are thousands of people outside Buckingham palace, singing God save the Queen, laying flowers and cheering
It’s impossible to get near the gates, the crowd is so big.#TheQueen #QueenElizabeth #ElizabethII pic.twitter.com/V4wt8sL4ps

World Reacting to the news of Queen Elizabeth II’s death.

With a heavy heart we bid farewell to an icon of selfless dedication and unwavering commitment, a queen who embodied the traits of a faithful and devoted sovereign. The reign of Her Majesty Queen Elizabeth II will forever be remembered. May her soul rest in eternal peace.

We will continue about Day 1 of the New Era in a new post!!