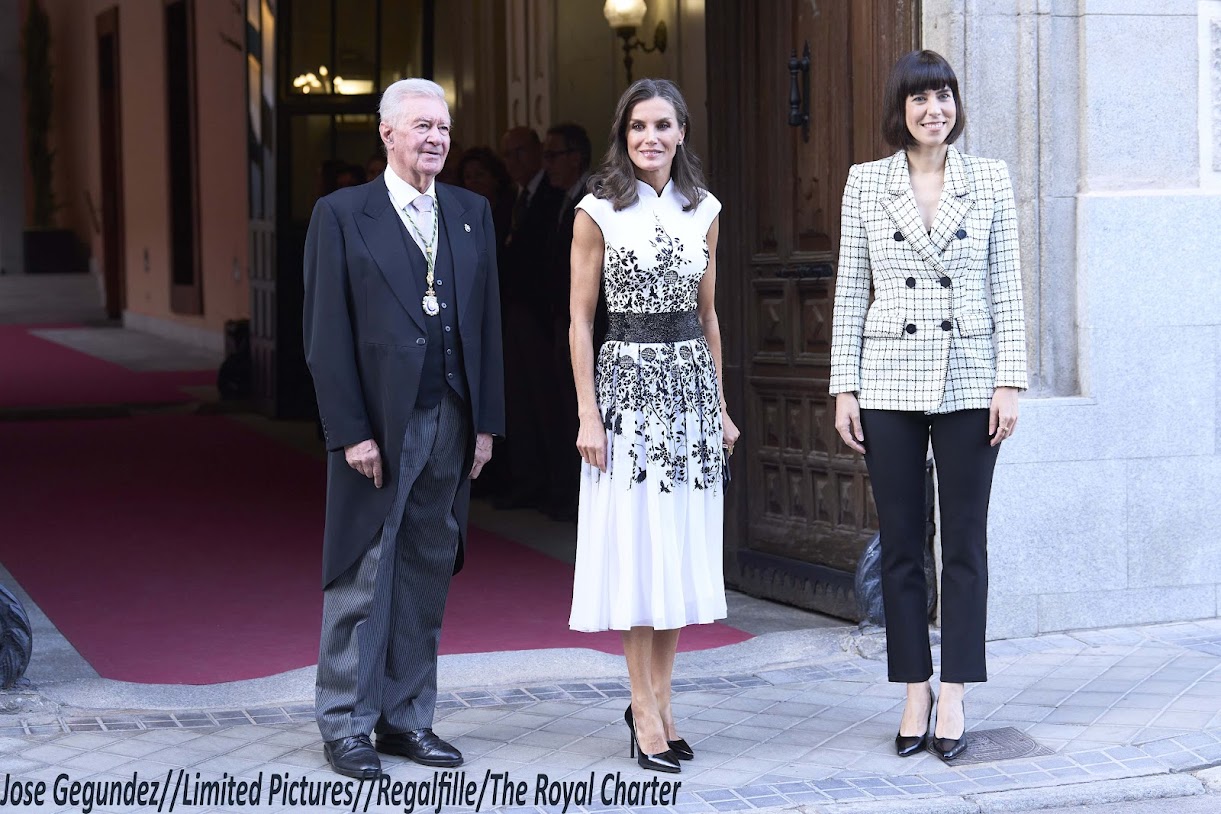 Queen Letizia of Spain today visited the Royal Academy of Engineering in Madrid to preside over the act where the newly elected Academics Elena García Armada and Ana Conesa Cegarra took charge of the office. Letizia has been actively working with the “Woman and Engineer” project and its Strategic Council to promote women’s role and participation in the field of engineering.

Both Elena and Ana are well-known names in their field and are known for the development of exoskeletons for therapeutics and technology applied to genomics, respectively. A successful ex-journalist, Queen Letizia was looking proud during the event to watch two brilliant women academics taking the charge of the office.

The Royal Academy of Engineering (RAI), founded in 1994, joined the Institute of Spain in 2015. The Royal Academy of Engineering has two fundamental objectives: the promotion of engineering in our society and independently advising public and private institutions on matters related to engineering. For this, it has a cast of 60 academics and 64 corresponding academics from 16 countries that form a network of excellent professionals in engineering and architecture. Another important objective is to offer a forum that allows the exchange of knowledge, ideas and opinions between engineering and business. 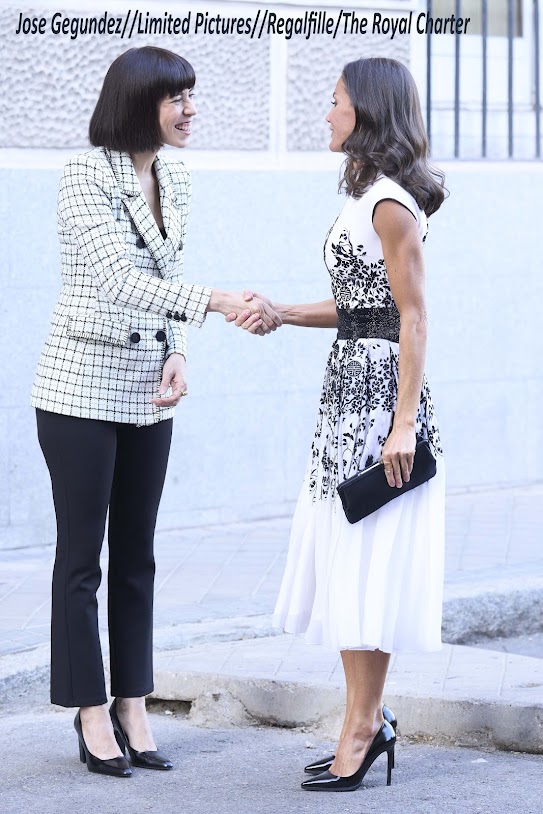 The event began with the presentations of “The robots of my life” by Elena García and “Computational transcriptomics: biology and engineering go hand in hand in an amazing journey through life at the molecular level” by Ana Conesa. Then Queen Letizia presented both ladies with gold medals and diplomas.

Ana Conesa Cegarra is a Research Professor at the Institute for Integrative Systems Biology of the Higher Council for Scientific Research (CSIC) in Valencia, and a Courtesy Professor at the University of Florida. After ten years of researching in the Netherlands, she returned as part of the Ramón y Cajal program for talent recovery at the Institute of Agricultural Research in Valencia. In 2014 she was hired by the University of Florida as a full professor in bioinformatics, a position she held until joining the CSIC in 2021.

Elena García Armada is considered one of the 30 most influential women in the world in the field of robotics who has received the European Inventor of the Year award from the European Patent Office, a recognition only held by two other Spaniards: Margarita Salas and José Luis Gómez (Talgo). She is also a member of the jury for the Princess of Asturias Award for Scientific and Technical Research. She is the founder and director of Marsi-bionics, a company that was born in 2013 by the Center for Automation and Robotics (CAR), a joint centre between the Higher Council for Scientific Research (CSIC) and the Polytechnic University of Madrid (UPM), transferring more than 20 years of knowledge in robot locomotion. 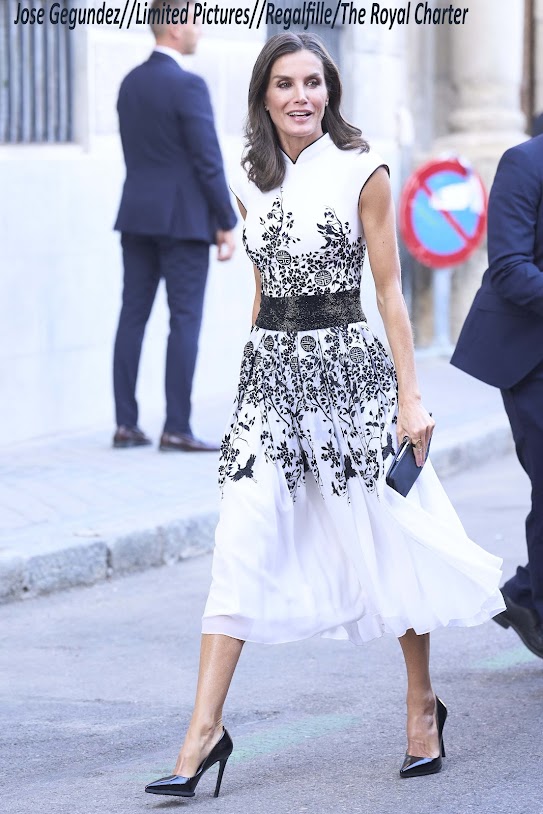 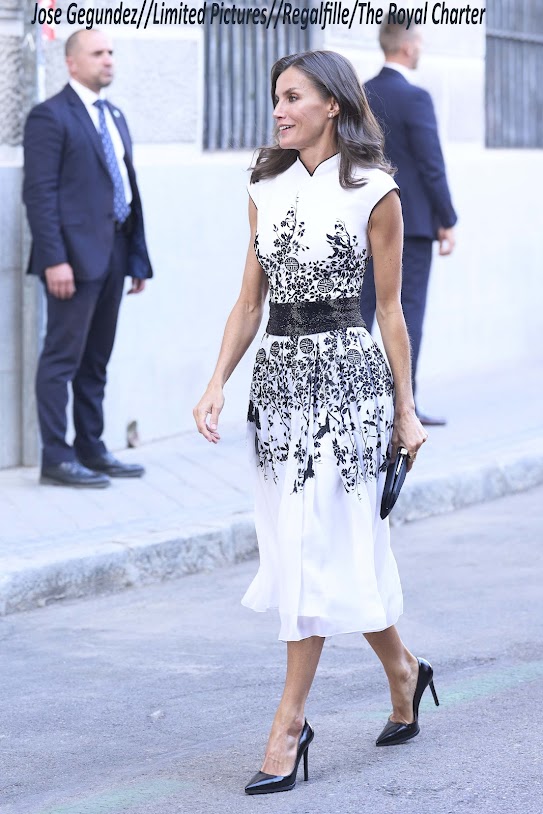 Moving towards Queen Letizia Style – The gorgeous Spanish Queen brought one of her most gorgeous outfits back from her wardrobe.

Letizia was wearing her white and black Felipe Varela dress that she first wore in 2017 at the Princess of Asturias awards. The outfit was an instant hit among the Royal fashion community when Letizia stepped out giving Princess Grace vibes. At that time, Letizia paired the outfit with black diamond earrings from the Swiss firm De Grisogono and on her left wrist was the Cartier white gold and diamonds bracelet inspired by the Greek columns on loan from Queen Sofia. 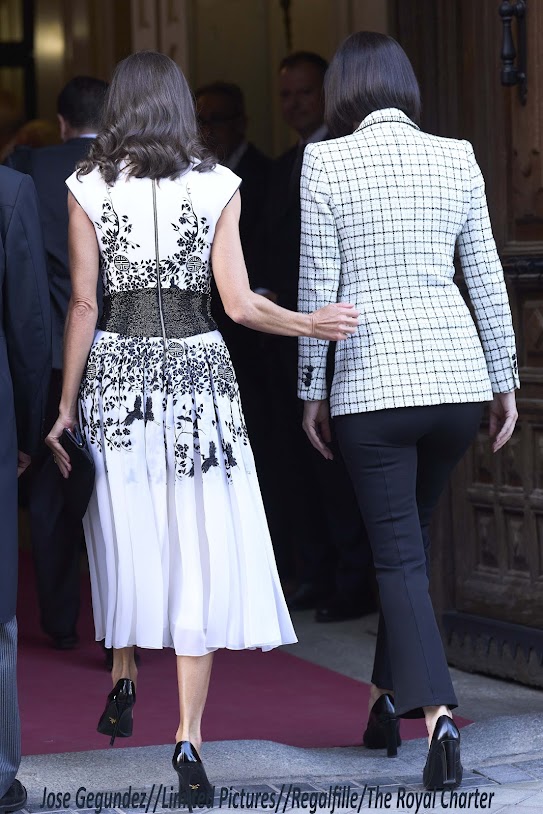 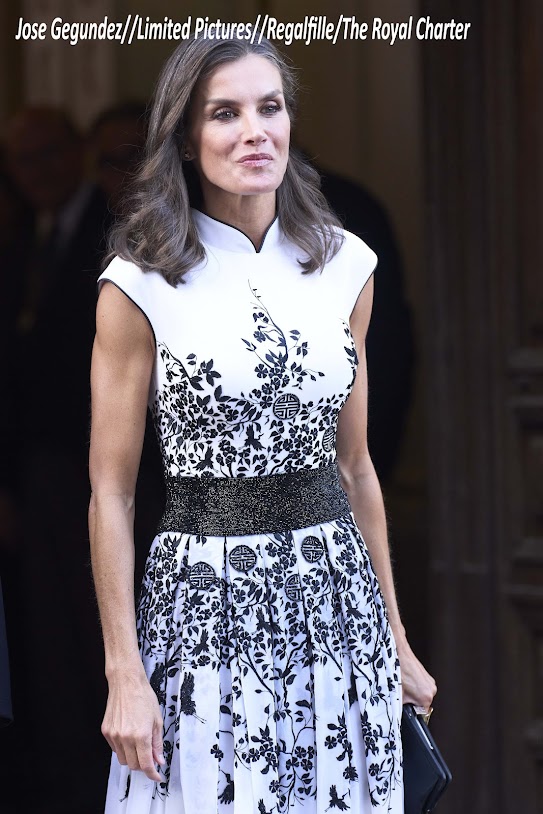 The white silk georgette dress embroidered in black thread and black crystal features a midi length flowy pleated chiffon skirt, mao neck, short sleeves, and tight waist with details of black sequins with a back zipper. This time Letizia made a small alteration to the outfit and removed the extra skirt lining it has last time that gave it more Princely vibes. 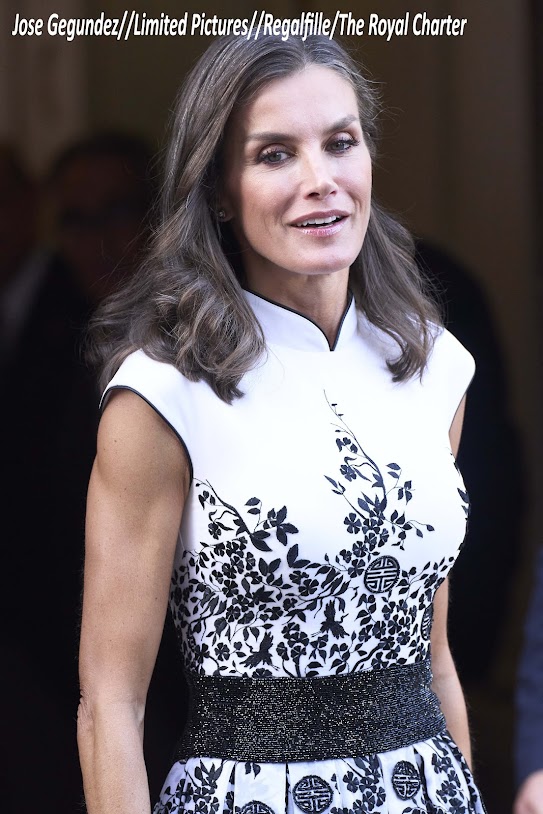 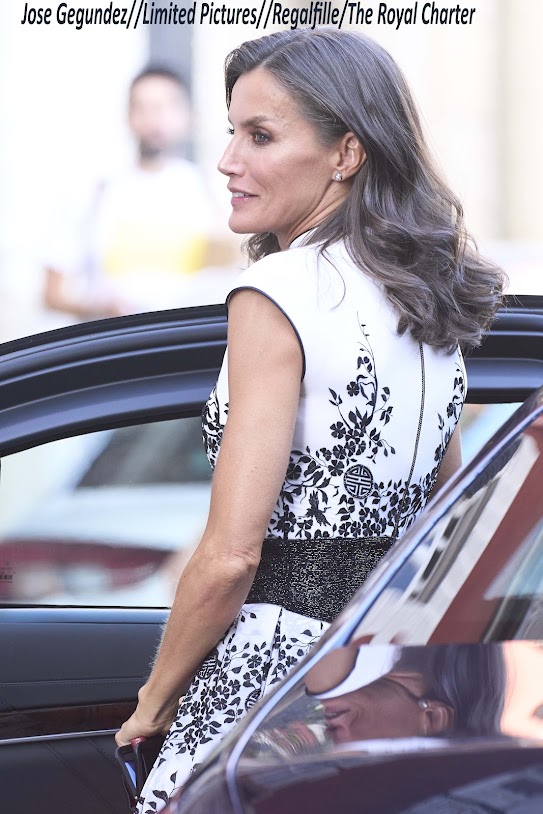 A closer look at the dress neckline and embroidery. 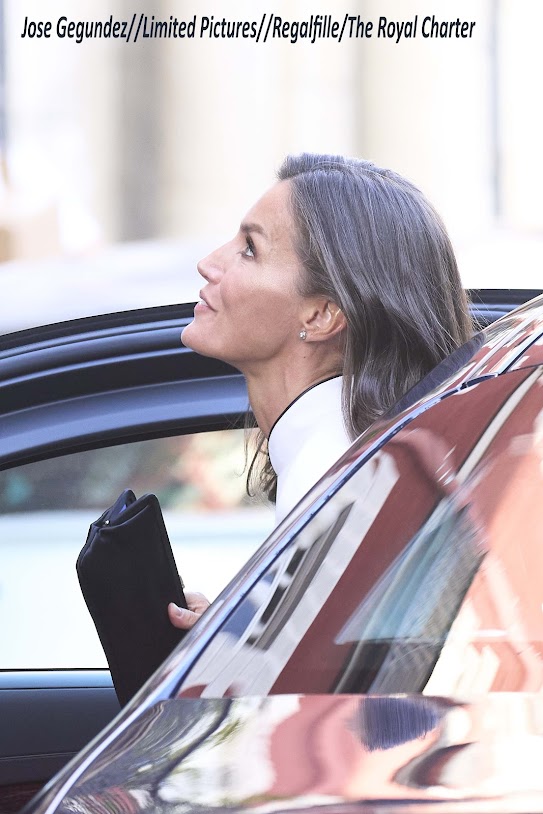 This time Letizia, keeping her look simple yet equally elegant, paired them with diamond studs from which her Australian pearls usually hang.

Queen Letizia was wearing her Prada saffino leather pumps and 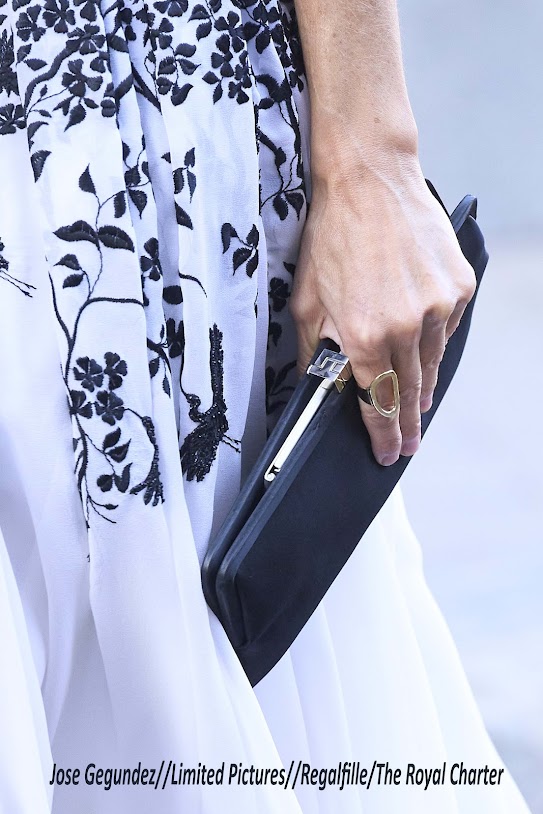 carried a Lambertson Truex clutch. (Thanks to Nuria for the bag id). 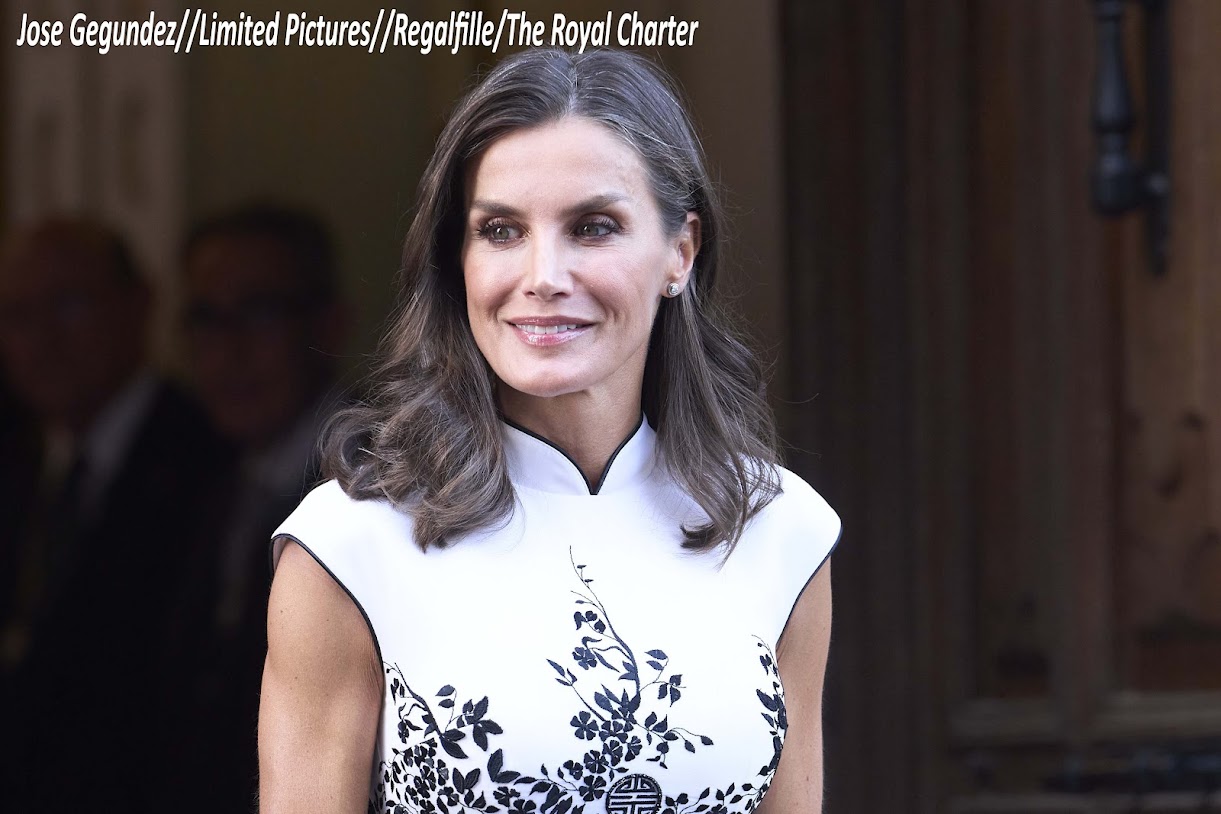 In Other news, the Palace announced that Queen Letizia will be travelling to LA, USA on December 12 this year to inaugurate the Cervantes Headquarters there.