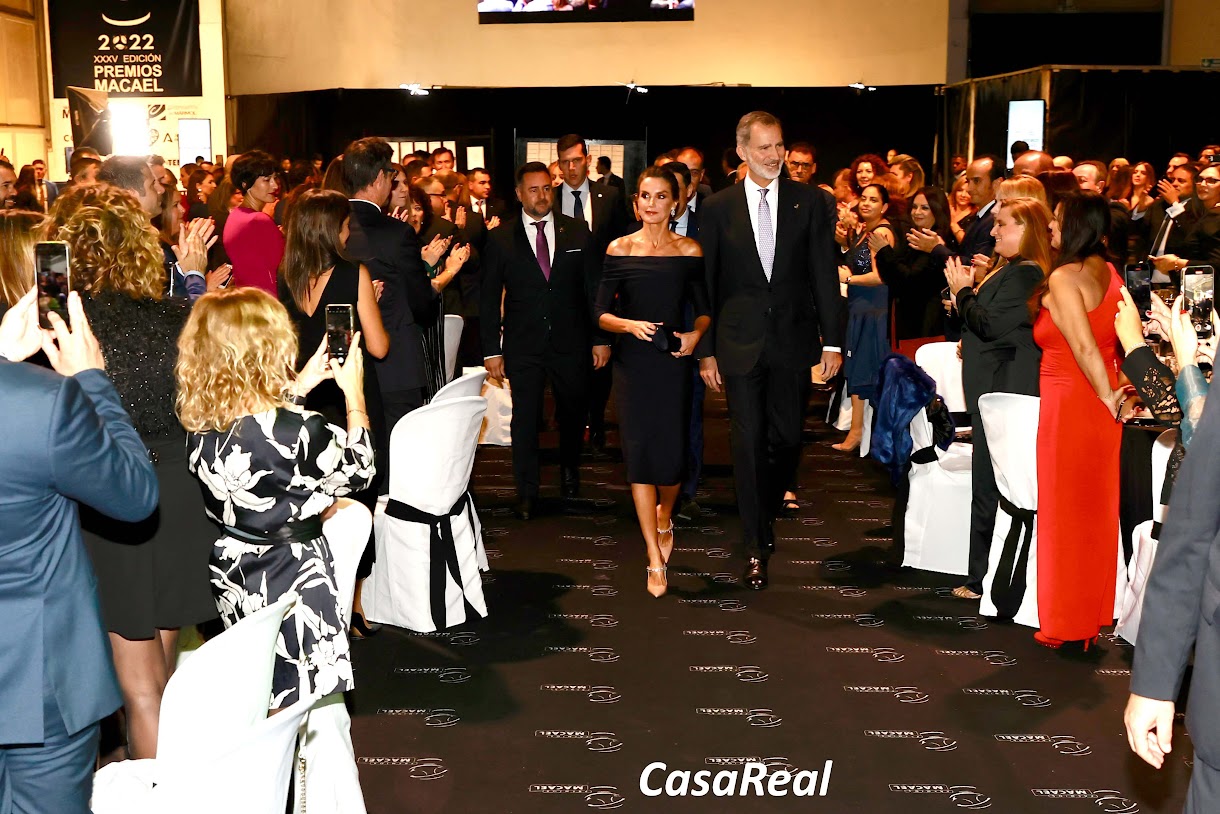 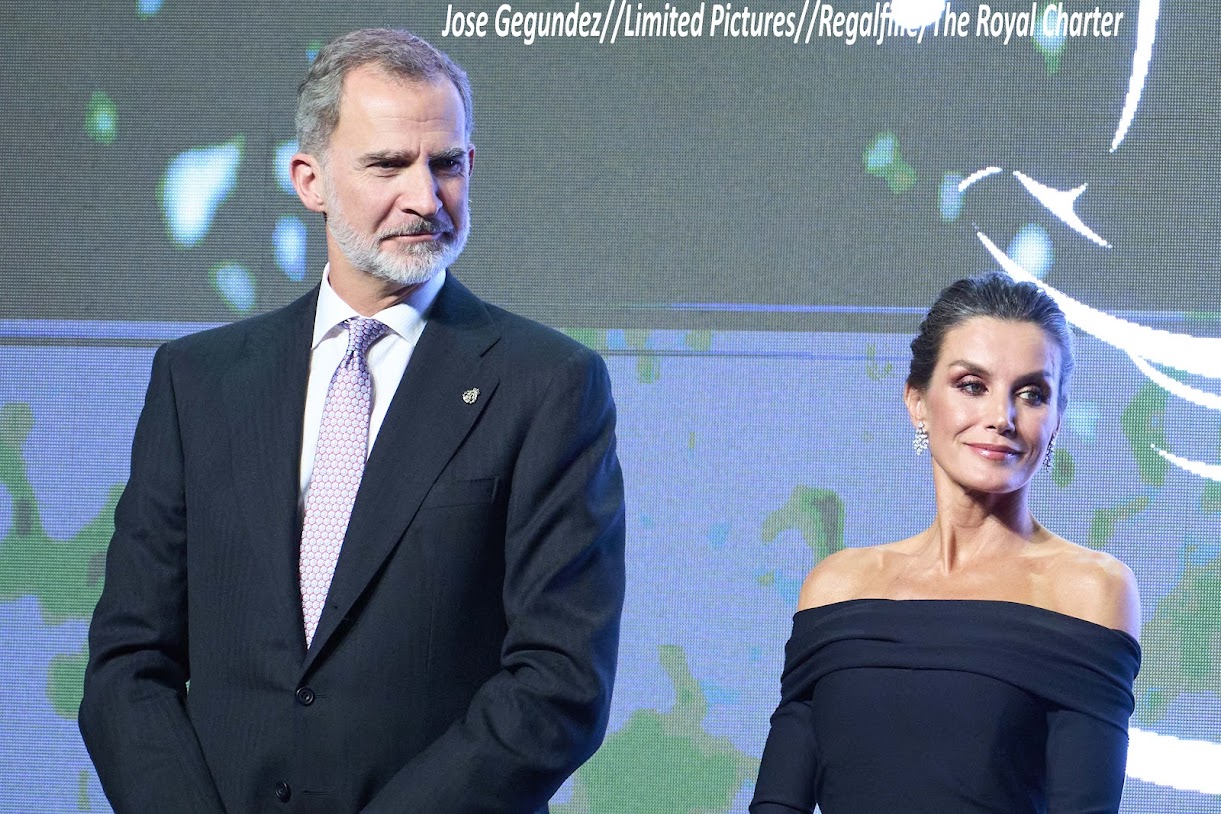 King Felipe and Queen Letizia of Spain presided over the XXXV edition of the “Macael Awards” at the Macael Multifunctional Building in Macael, Almeria. Organized by the Association of Marble Entrepreneurs of Andalusia (AEMA) the award celebrates its 35th edition this year. 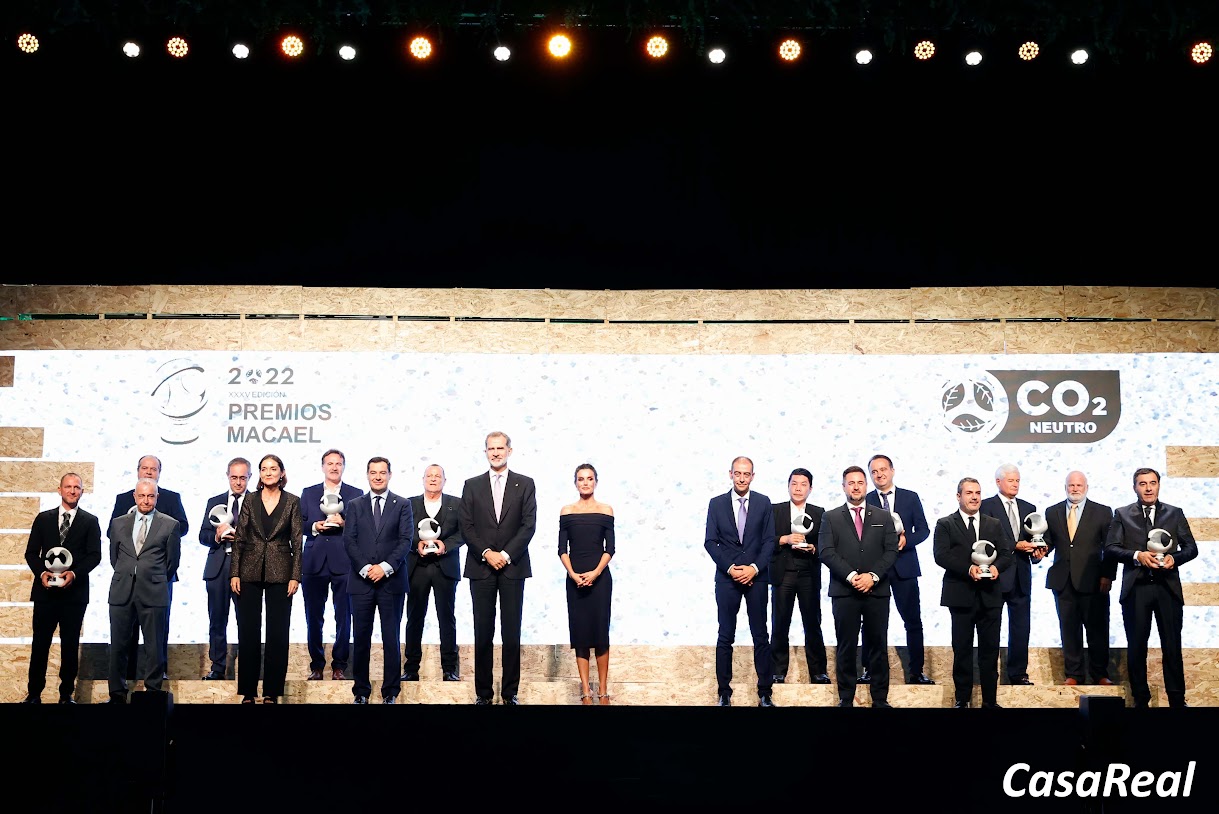 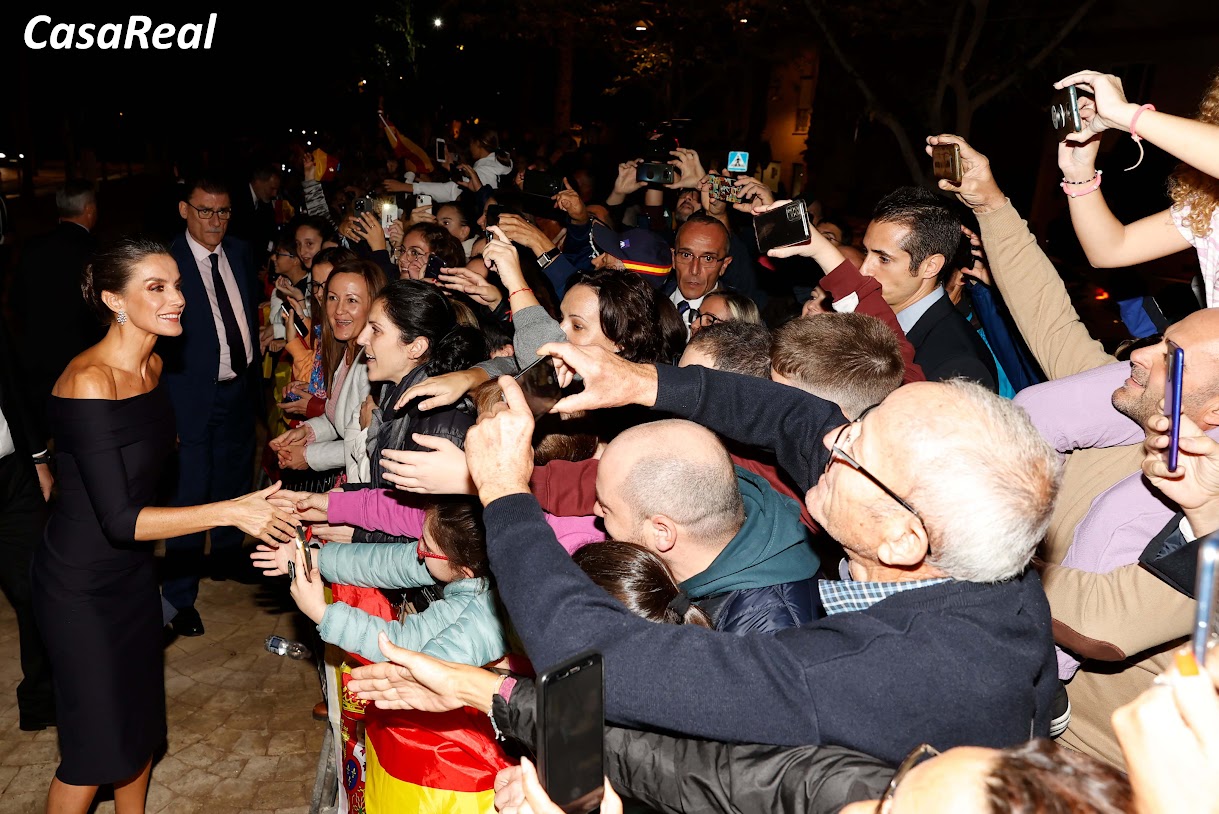 The international awards reflect a  strong commitment to innovation, the use of technology, great know-how, and the work of marketing and conquering new markets. This edition offers a new category the “Sustainability Award”.  And it is that both the extraction and the work of the industry, go hand in hand with the conservation of the environment. Companies use efforts and resources to carry out a continuous transition towards a total use of renewable energies, use water in a respectful way, renew and recycle it, and manage waste more efficiently. 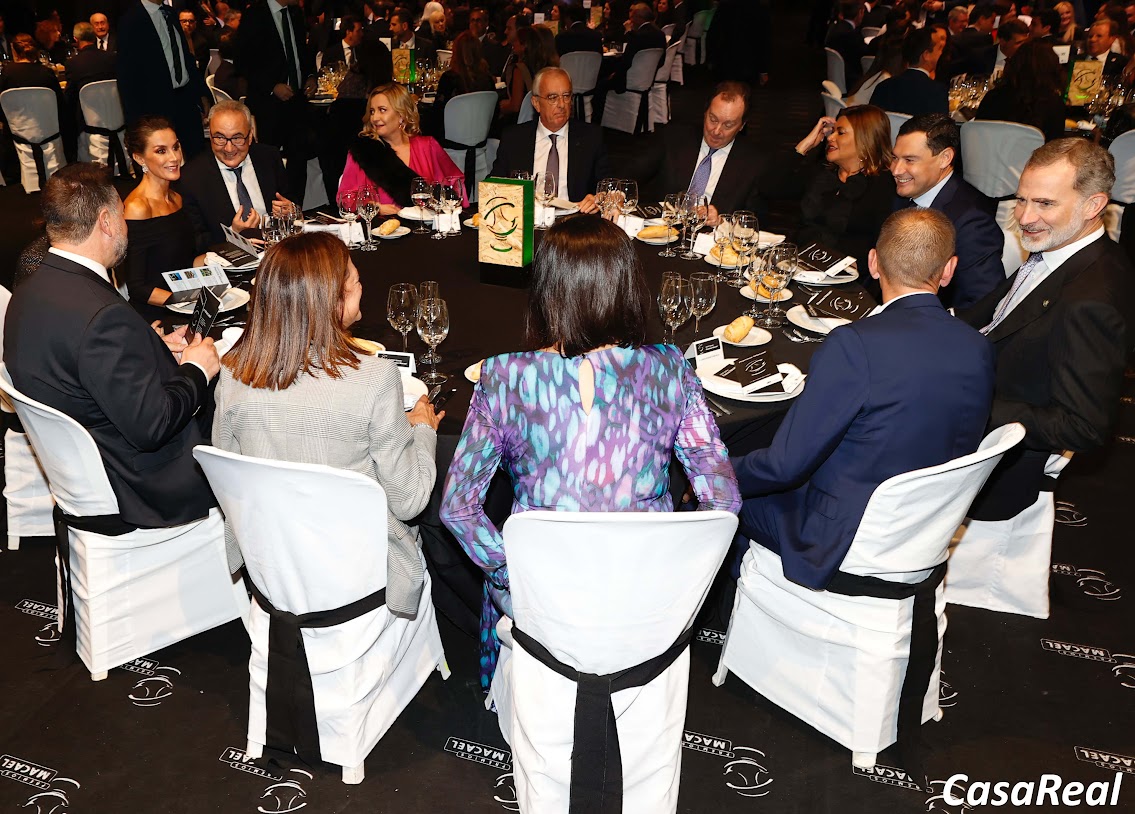 The Royal couple was joined by the state and local authorities, including the Minister of Industry, Commerce and Tourism, the President of the Andalusian Parliament and the Mayor of Almería. It was a cocktail evening that was followed by a sit-down dinner. 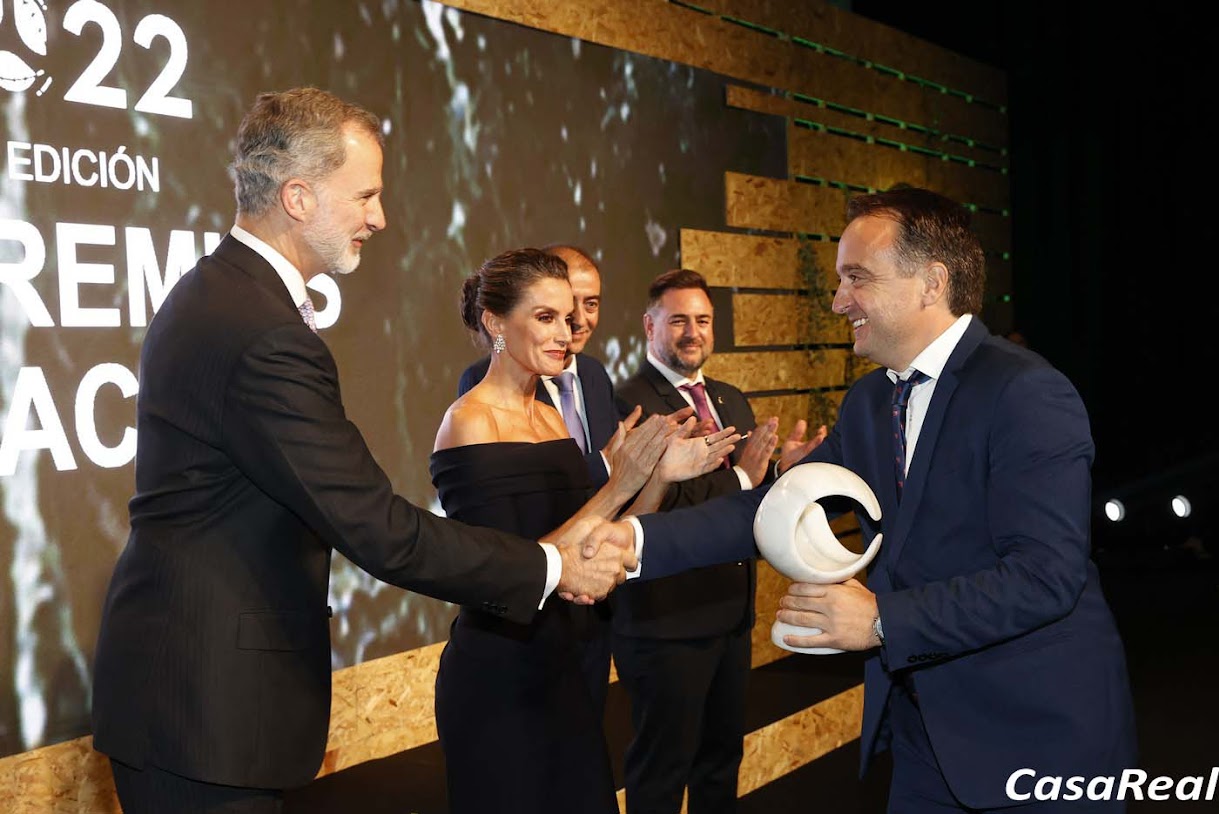 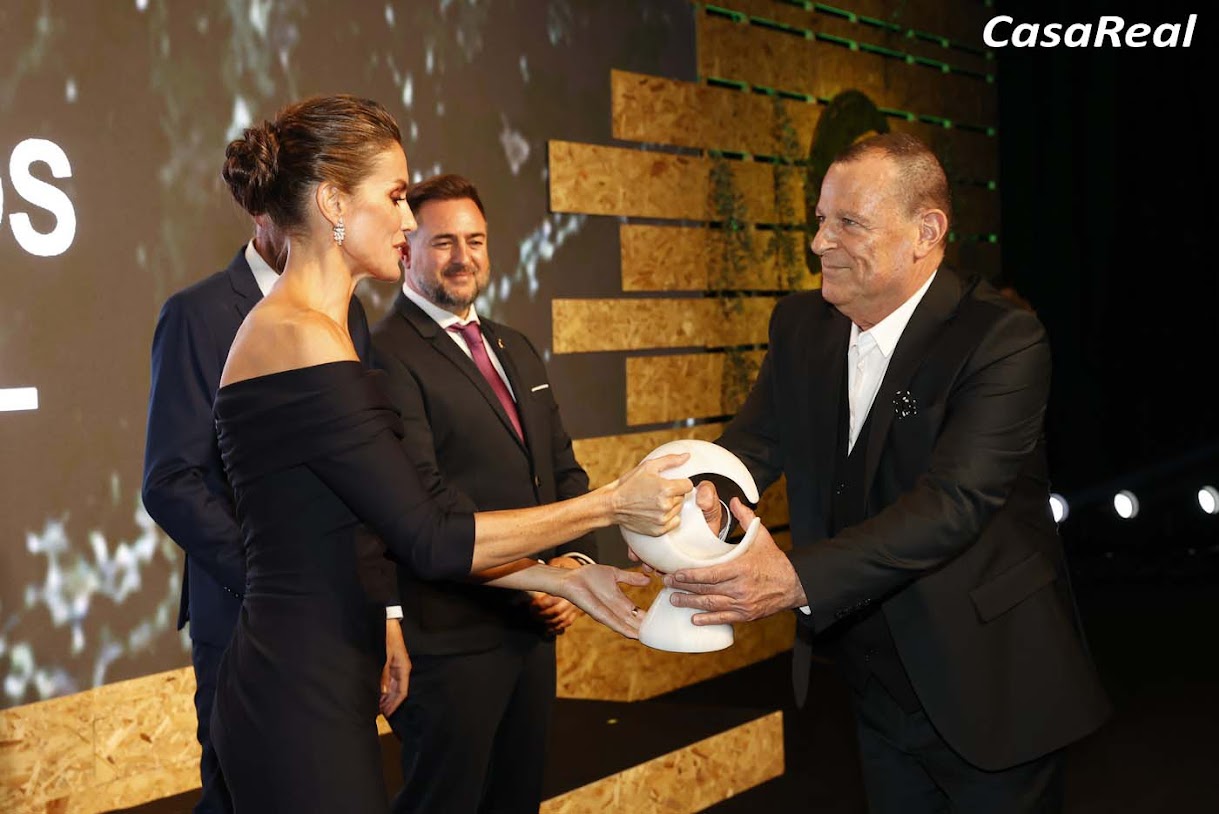 After a video projection, the winners of the “Macael 2022” awards were announced and King Felipe and Queen Letizia arrived on stage to present the awards. 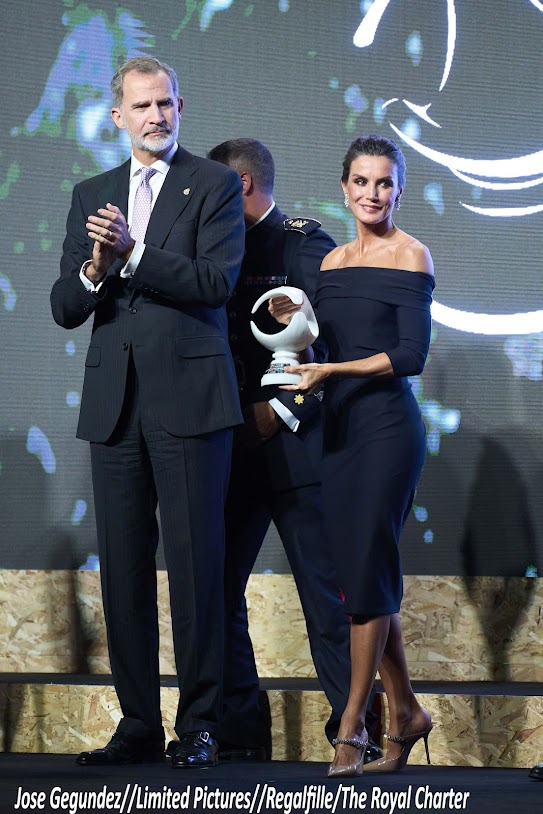 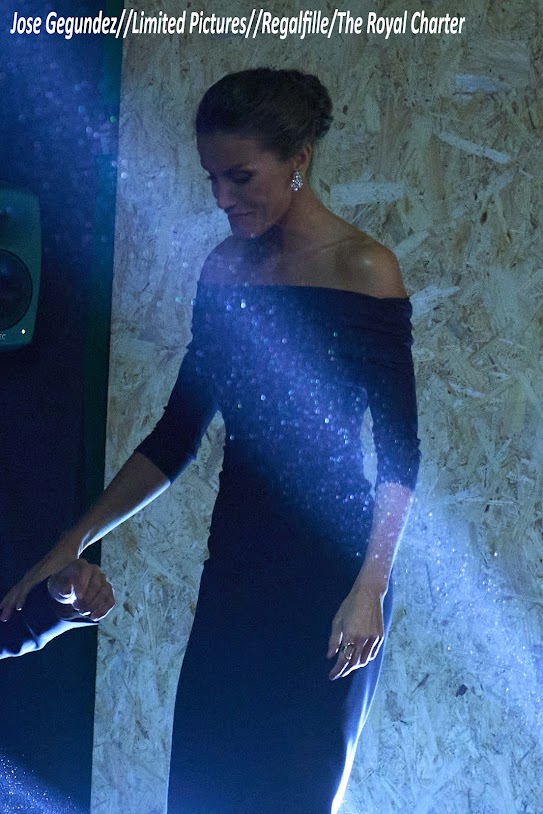 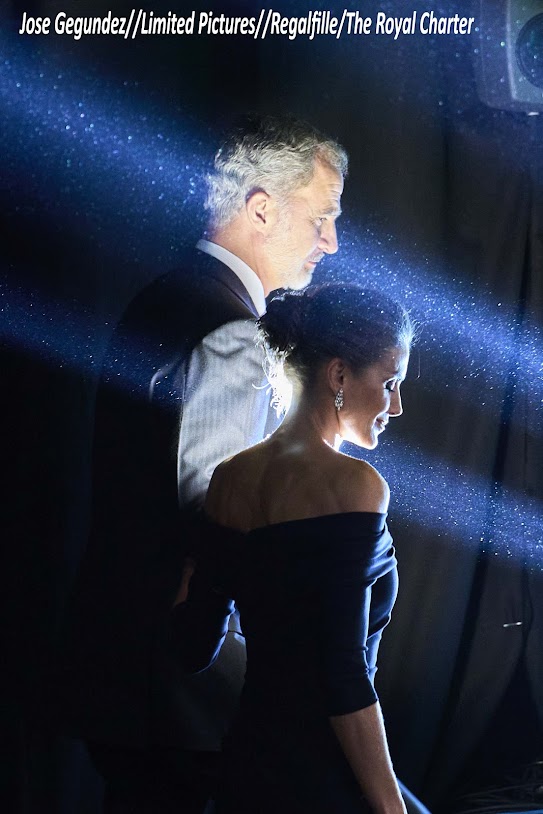 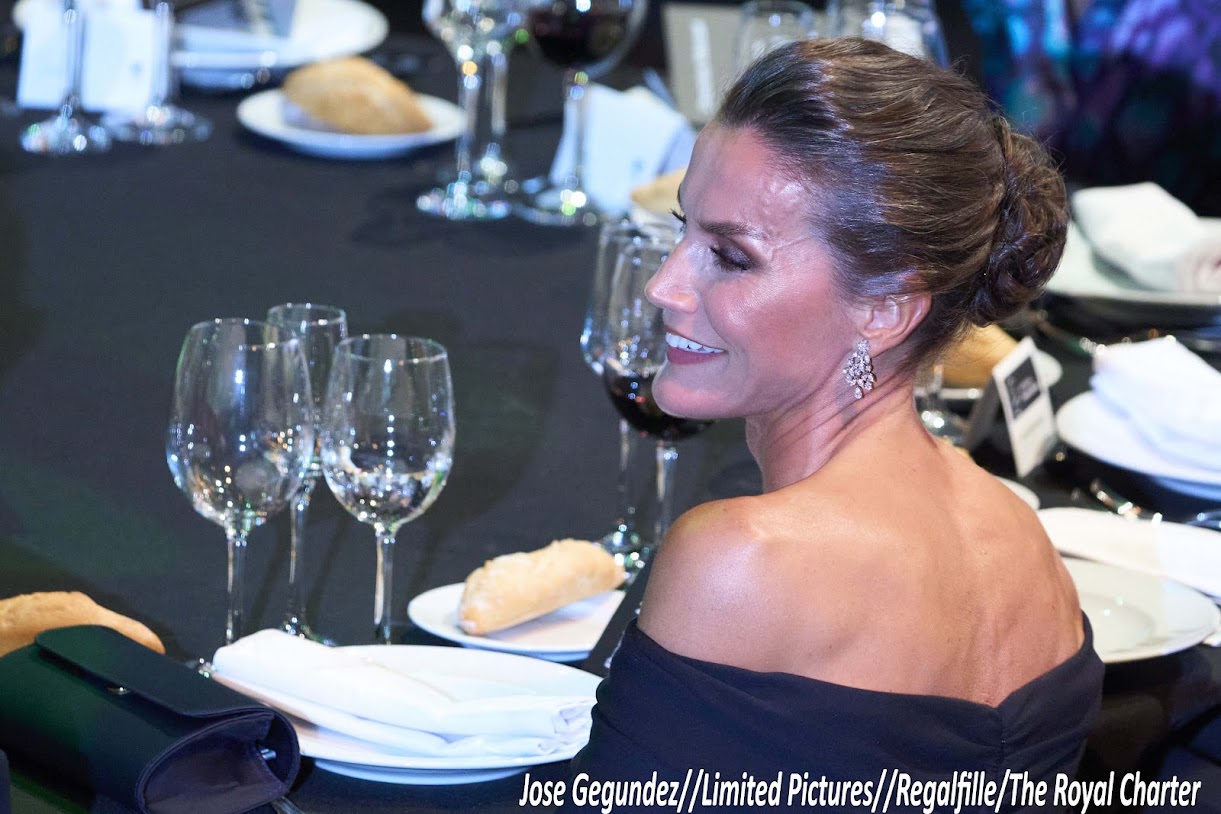 It was a walk down memory lane for Queen Letizia. During his speech, King Felipe reminded the audience about the 2002 event which was conducted by the then journalist Letizia Ortiz. 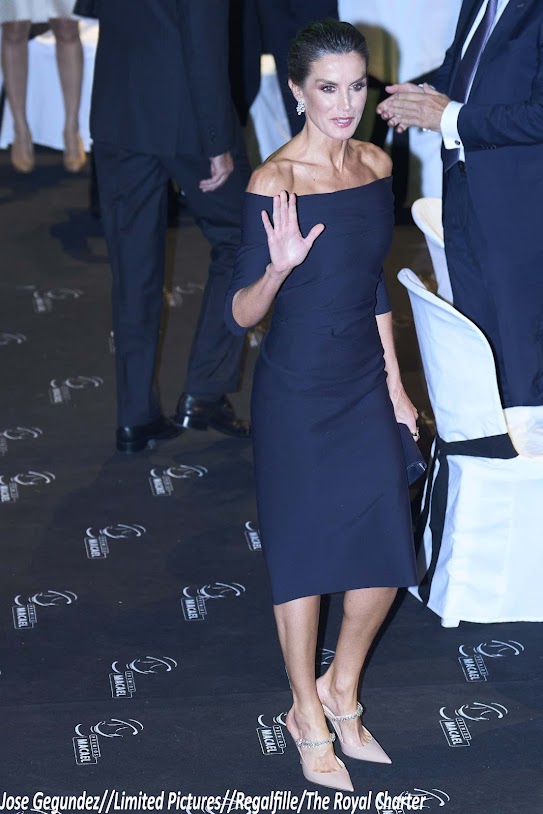 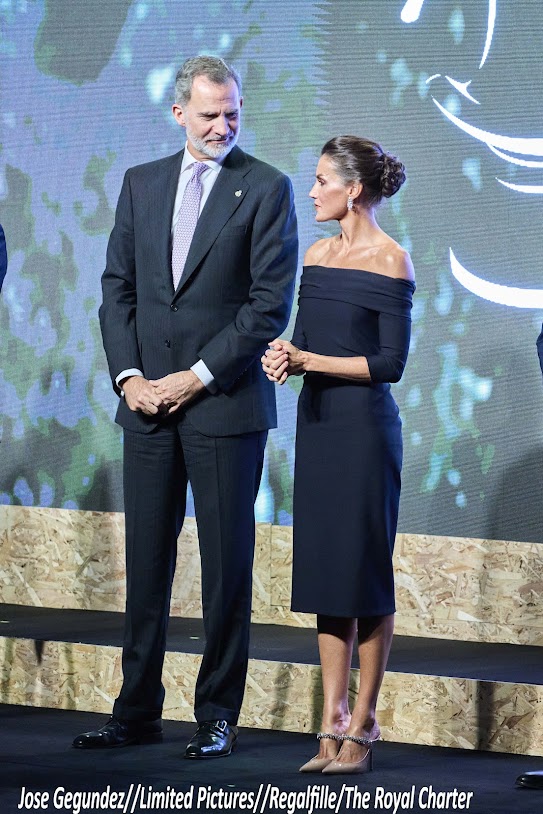 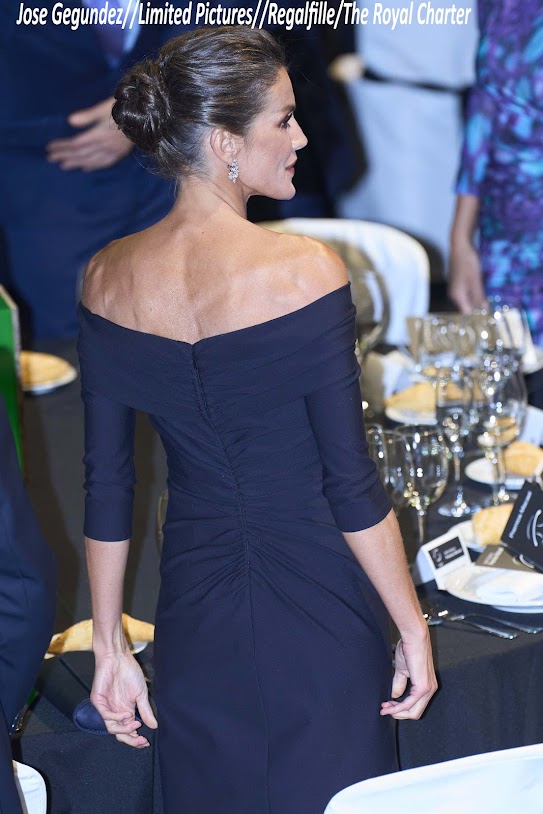 For the evening, Queen Letizia was looking gorgeous in a navy off-shoulder dress. The label of the dress remained unknown so far. 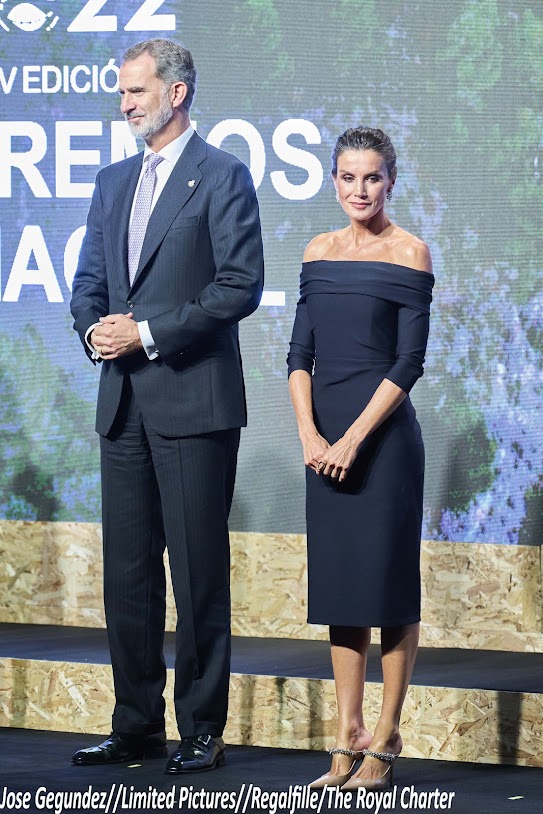 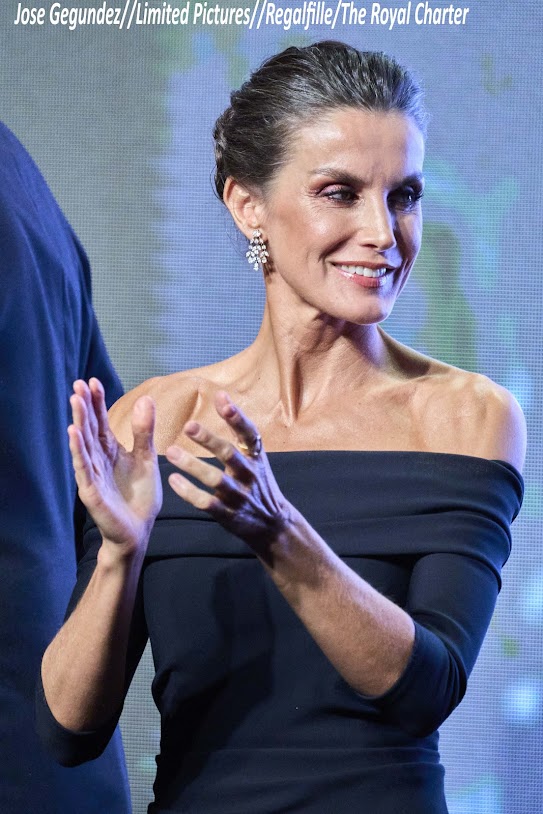 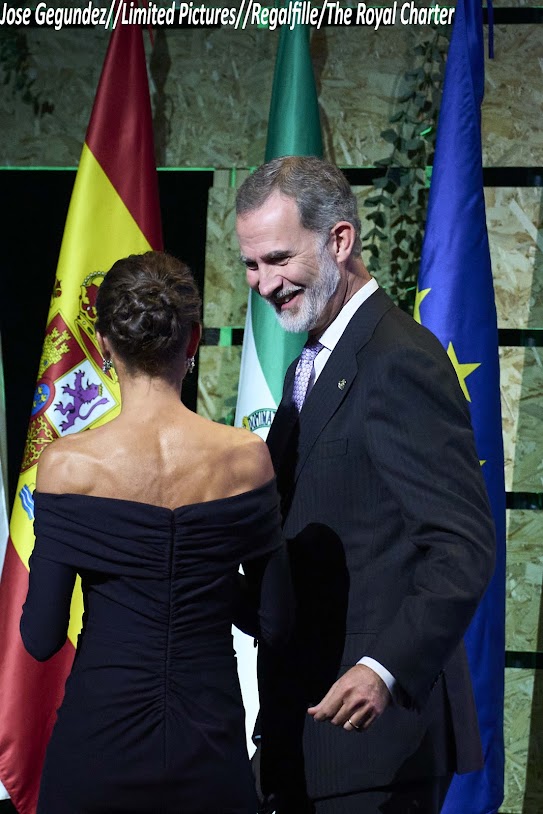 The knee-length dress features ruched detailing a the back with zipper closure and 3/4th sleeves.

Once again Queen Letizia wore her diamond Qatri earrings that were a gift from the Emir of Qatar earlier this year.

She was carrying her Felipe Varela clutch and her Karen Hallam ring was not missing either.

Next week, The Royal Couple will be heading to Croatia. 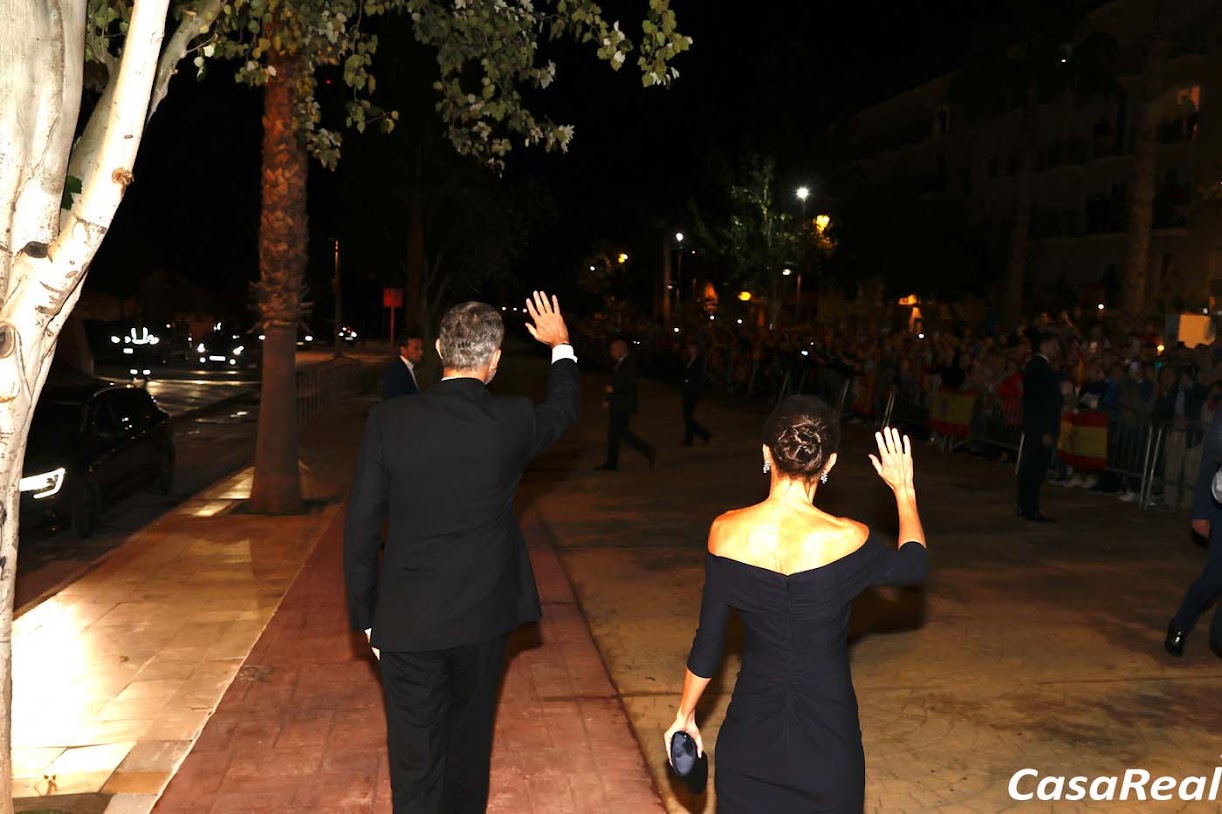