King Felipe and Queen Letizia of Spain hosted the Diplomatic Corps Reception 2023 at the Royal Palace of Zarzuela in Madrid. An event is an annual event and the Royal couple hosts the reception every year at the beginning of the year.  The Diplomat is a public official who is an expert in international relations and represents their country in Spain.

The event is attended by the Prime Minister, members of the parliament, Ambassadors to Spain, and Senior officials from the Ministry of Foreign Affairs, European Union and Cooperation. King Felipe and Queen Letizia received the guests in the Gasparini Room of the Palace.

Then the King and Queen with the guests headed to the Throne Room where the act began with the intervention of Monsignor Bernardito Cleopas Auza. Then King Felipe addressed the gathering and said,  “It is essential that the international community, of which you are the high representatives here, continue to work for a peaceful international order, in which justice and law prevail, and not the imposition by force of arms or by the threat of their use.”

The reception concluded with a meeting between Don Felipe and Doña Letizia with the attendees. 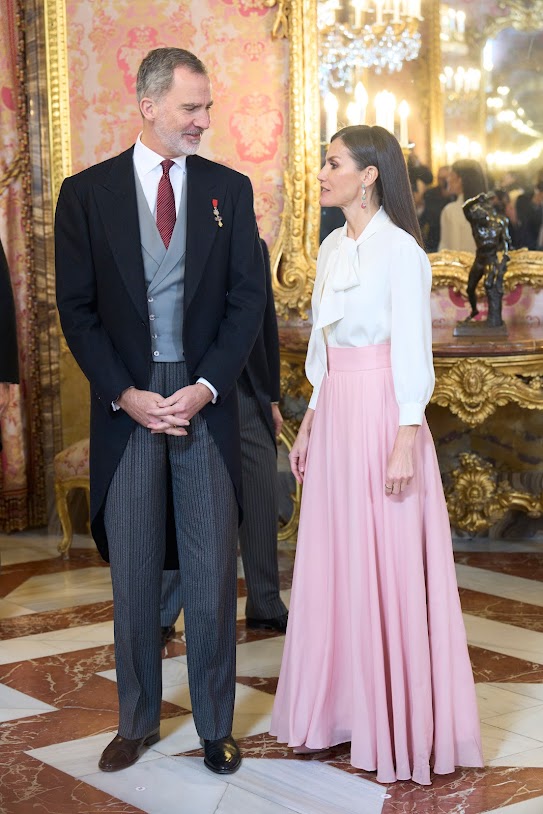 In the Kingdom of Spain, following the Latin tradition, the diplomatic profession is structured around a general body – the Diplomatic Career – which belongs to the Ministry of Foreign Affairs, European Union and Cooperation, and uses abroad officials from other bodies belonging to those Ministries (Defence, Culture, Commerce, etc.) that, due to their activities, have an external sector.

Letizia was wearing a white Carolina Herrera tie-neck blouse that she first wore in 2017 at the Professional courses opening. The Queen teamed up the blouse with a pink long pleated skirt that looks like a custom-made piece.

Letizia paired the outfit with her pink Lodi pumps.

The surprise element was the return of her TOUS earrings that she first wore in 2014.

And her new Coreterno ring was not missing either.

and that was all for the week for Queen Letizia. We will find out about her next engagement on Friday.