King Felipe VI and Queen Letizia of Spain inaugurated the 2023 International Tourism Fair-Fitur at IFEMA in Madrid. The annual winter event is a staple royal engagement of Felipe and Letizia’s early-year calendar. Every year the Royal couple visit the Fair on its opening day and meet with various stakeholders.

Upon arrival at IFEMA, King Felipe VI and Queen Letizia were received by the president of the IFEMA Executive Committee, José Vicente de Los Mozos and the President of the Republic of Guatemala, Alejandro Giammmattei. Guatemala is the partner country of FITUR’s 2023 edition. This year’s edition has made a strong return of almost three year’s pandemic impact.

The Royal couple then began the tour in Hall 10 which included the FITUR Woman exhibitions, Hotusa, World2meet and Iberia. Next, they went to hall 9, which holds the stands for Turespaña and Madrid, they continued to hall 7 to stop at the exhibitors of Castilla-La Mancha and Extremadura.

Next, The King and Queen went to pavilion 3, where they visited the exhibitor from Guatemala and the one from the Dominican Republic. This year the fair also has exhibitions from Italy and India.

The Fair managed to bring significant growth this year that matched the pre-pandemic occupancy figures of its record year (2020) and align with the momentum that national and international tourism is gaining. A total of 8,500 participants, 131 countries, 755 main exhibitors and 66,900 m2 of exhibition define this edition, which will bring revenue of more than 400 million euros for Madrid.

Heading towards What Queen Letizia Wore – The event always brings some stylish or experimental look from the Spanish Queen and today was no exception. Queen Letizia chose a monochrome black look.

More than the outfit it was Queen’s glowing face and neat ponytail that gave this look a brightening touch-up.

Queen Letizia was wearing a Sandro-Paris Poplin Collar sweater. Thanks to letizia_de_princesa_a_reina for the id. The $345 Knit sweater with a V-neck featured a contrasting white detachable embroidered collar. It’s currently available on Nordstrom and Sandro-Paris’s online store.

The Queen was wearing her black Unisa Luke Boots that she first wore earlier this month during Menorca’s visit. 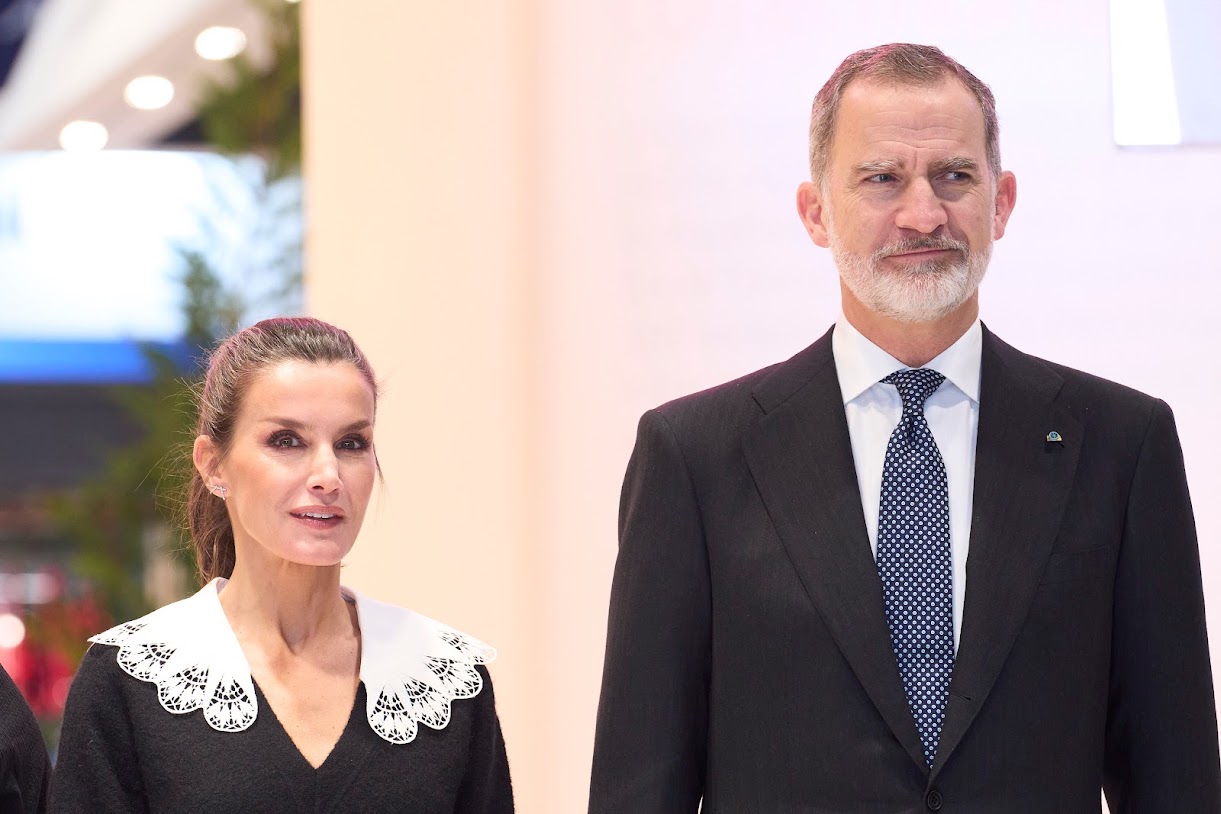 Tomorrow, King Felipe and Queen Letizia will offer a Lunch in honour of the President of the Republic of Guatemala, Mr Alejandro Eduardo Giammattei Falla.