The Princess of Wales, Catherine, gave a pleasant surprise in the much troubled Royal world today when she met with the Company of Royal Navy Sailors of HMS Glasgow at Windsor Castle. This was Catherine’s second official engagement of the week – she joined Prince William earlier this week for a visit to Wales.

The 40-years olf gorgeous Princess was named the sponsor of HMS Glasgow in June 2021. Prince William made the announcement during a visit to view the construction work on the HMS Glasgow last year. Speaking to the staff after the tour of the facilities, The Earl of Strathearn, now the Duke of Rothesay, revealed,

Today, I’m very pleased to announce that my family’s connection with Type 26 will endure for many years to come. Her Majesty The Queen has approved the appointment of my wife, Catherine, as Sponsor of the superb ship we see taking shape outside – HMS Glasgow. I know that Catherine will be delighted to join you here in Glasgow for the naming ceremony in due course.

It was a proud day for the Ship’s Company of HMS Glasgow, the first Type 26 frigate, as they met her Sponsor, the Princess of Wales. https://t.co/0ICg5mvDty

Princess Catherine met with the HMS Company today at Windsor Castle – a few minutes walk away from her new home Adeliade Cottage, to learn more about their roles and what’s next on the route to getting her in the water.

HMS Glasgow- an advanced anti-submarine warfare vessel is the first in a new generation of cutting-edge frigates called the City-class, exceptional ships designed to adapt and deliver manpower and capabilities to meet every challenge.   The vessel will provide essential protection to nuclear deterrents and aircraft carriers.

This is not the first time when The Princess of Wales has been associated with a ship or vessel. In 2011, Catherine named the Trearddur Bay Lifeboat Stations new Atlantic 85 inshore RNLI lifeboat in Wales as her first official engagement. In 2013, the then pregnant, Duchess of Cambridge Christened The Royal Princess – a Cruises ship.

The audience was held at Windsor Castle’s Green Royal Drawing Room – part of the castle’s semi-state apartments. In 1992 a fire at Windsor Castle severely damaged the Semi-State Rooms, including the Green Drawing Room. By good fortune, however, the contents of the rooms had been removed at the time. Each room was subsequently restored to its nineteenth-century appearance using the original designs supplied to George IV.

You might remember the room from a picture released in 2016 to mark the late Queen Elizabeth II’s 90th birthday, in which she posed with her all great-grandchildren and 2 youngest Grandchildren.  The Royal Drawing room has witnessed many family and historic moments in its existence like the christening of Prince Harry in 1984.

When the Duke and Duchess of Cambridge moved to Adeliade cottage on Windsor Grounds earlier this month, there were many speculations about how they will continue to undertake engagements as the commute to their London office could cause stress on their diary. But after the Queen’s demise earlier this month, it seems The new Prince and Princess of Wales have decided to put The Queen’s favourite home to official use.

Moving toward The Princess of Wales style – Catherine was looking elegant in her favourite colour – Navy.

The Princess of Wales wore Alexander McQueen Leaf Crepe Single Breast Blazer Jacket. Thanks to Bojana on Twitter for the id. Catherine teamed up the blazer with matching trousers.

The Princess was wearing her Holland Cooper Shirt Bodysuit that she first wore in January 2021 during the video calls.

We saw the return of her Rupert Sanderson Malone Pumps.

The Princess of Wales was also wearing her Astley Clarke Round Stilla Lapis Lazuli Pendant Necklace.

The Princess topped her outfit with what looked like her Anderson Crocodile Embossed Belt.

In other news, the later Her Majesty Queen Elizabeth II’s death certificate has been revealed and according to the certificate, The Queen died at 03:10 PM on September 08th. 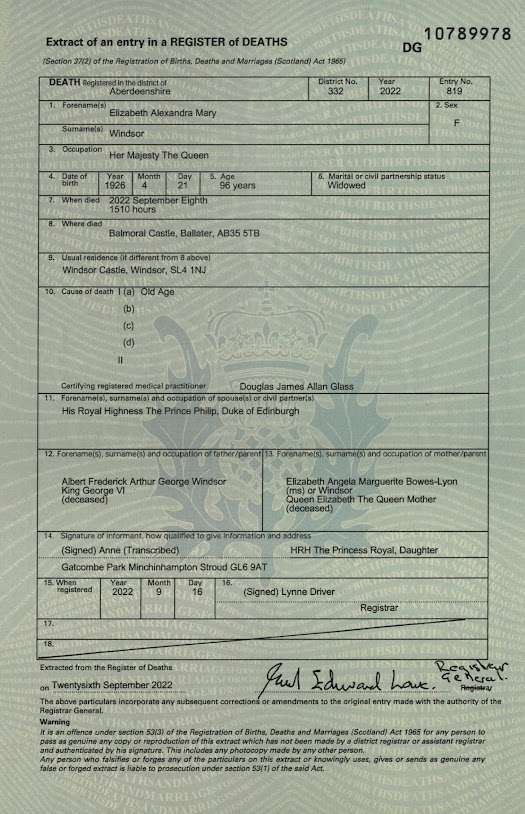