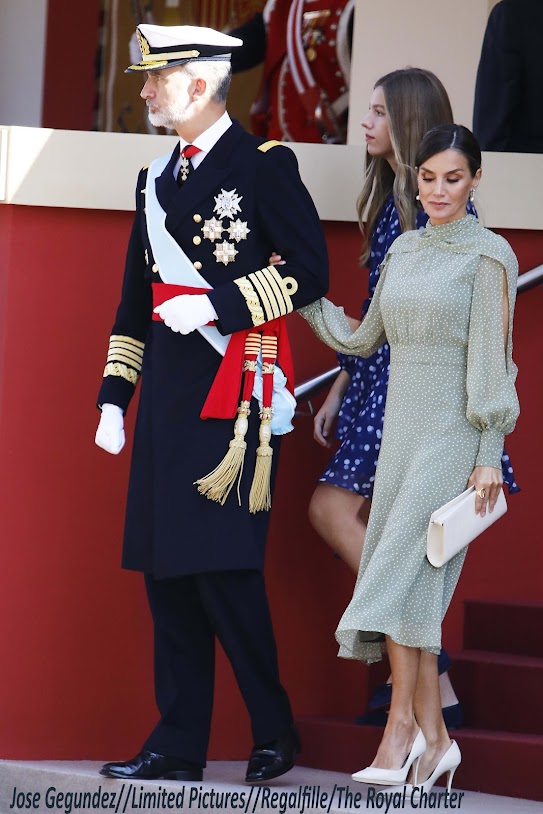 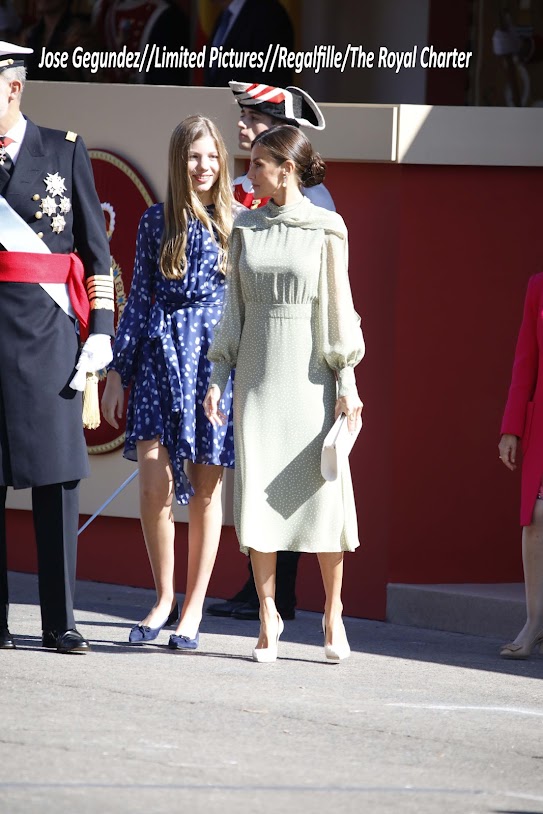 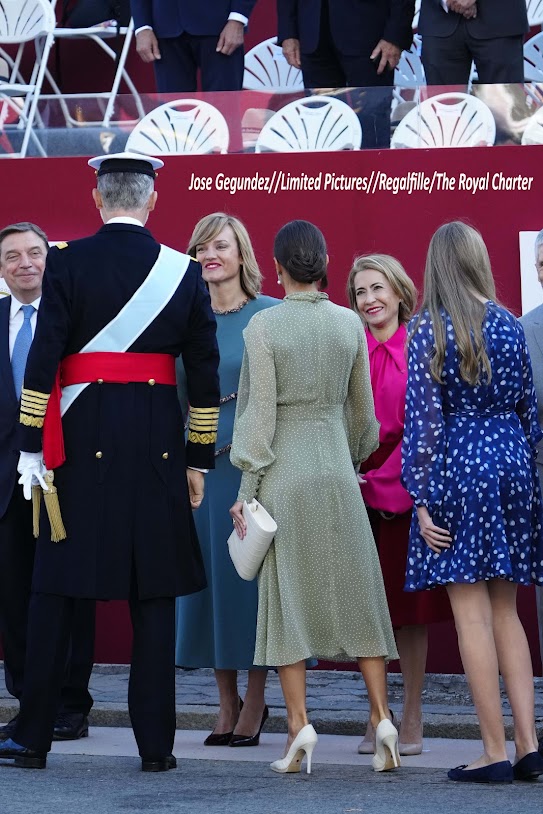 King Felipe VI and Queen Letizia of Spain, today, attended the annual National Day parade and celebrations in Madrid. They were joined by their younger daughter Infanta Sofia for the parade at the Plaza de Lima. Their elder daughter Princess Leonor of Spain is currently in Wales and will be back in Spain at the end of the month for her fall term break.

The annual event featured a parade and a reception at the Royal Palace of Zarzuela. The Royal Family arrived escorted by the Royal Escort squad and was received by the Prime Minister, Pedro Sánchez.

The Royal Guard Honors Group was tasked with rendering honours.

King Felipe reviewed the troops before the military parade by land units of the Armies, the Navy, the Civil Guard, the Military Emergency Unit, the Royal Guard, the State Security Forces and Bodies, and various Civil Protection and Emergency Security Organizations.

The Acrobatic Patrol of the Air Force (PAPEA) carried the Flag of Spain, three royal guards, representatives of each of the armies, a civil guard and a national policeman, moved the banner to its place of honour, where it was hoisted to the chords of the national anthem. Then a tribute was paid to the fallen soldiers who gave their lives for the country and peace-keeping missions. The Music Unit of the Royal Guard was in charge of interpreting “Death is not the end”, to the beat of which the script and crown-bearer movements were performed.

Around 4,000 troops from the armies and the Navy, as well as the Civil Guard, National Police, Civil Protection and Maritime Rescue, plus 84 aircraft (58 planes and 26 helicopters), more than 150 vehicles and nearly 220 horses took part in the Parade today.

Also known as National Day, the Hispanic day is a public holiday in Spain, on which the King of Spain supervises the raising of the Spanish national flag in the centre of Madrid Plaza de Lima and then leads a military parade after being accompanied by the Prime Minister. This year both the flag-raising and a small parade were held without any public audience at the Palace. 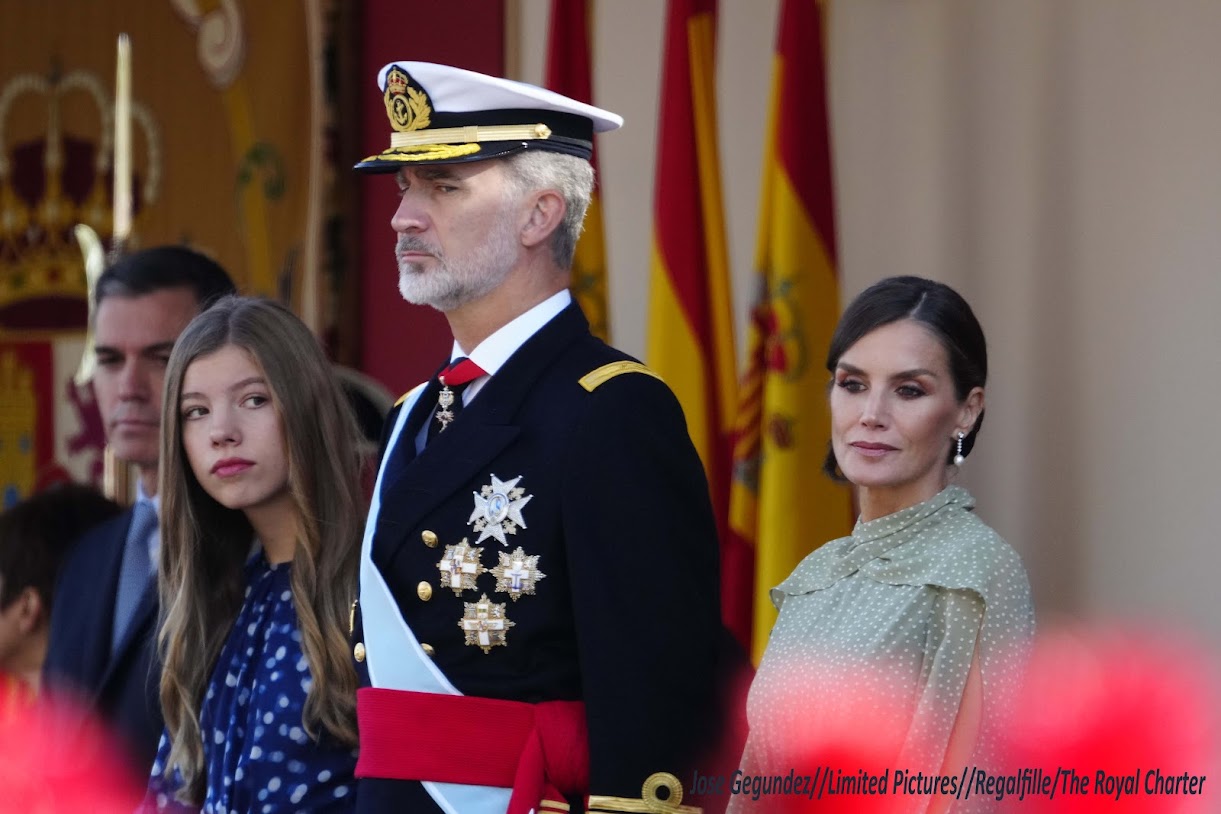 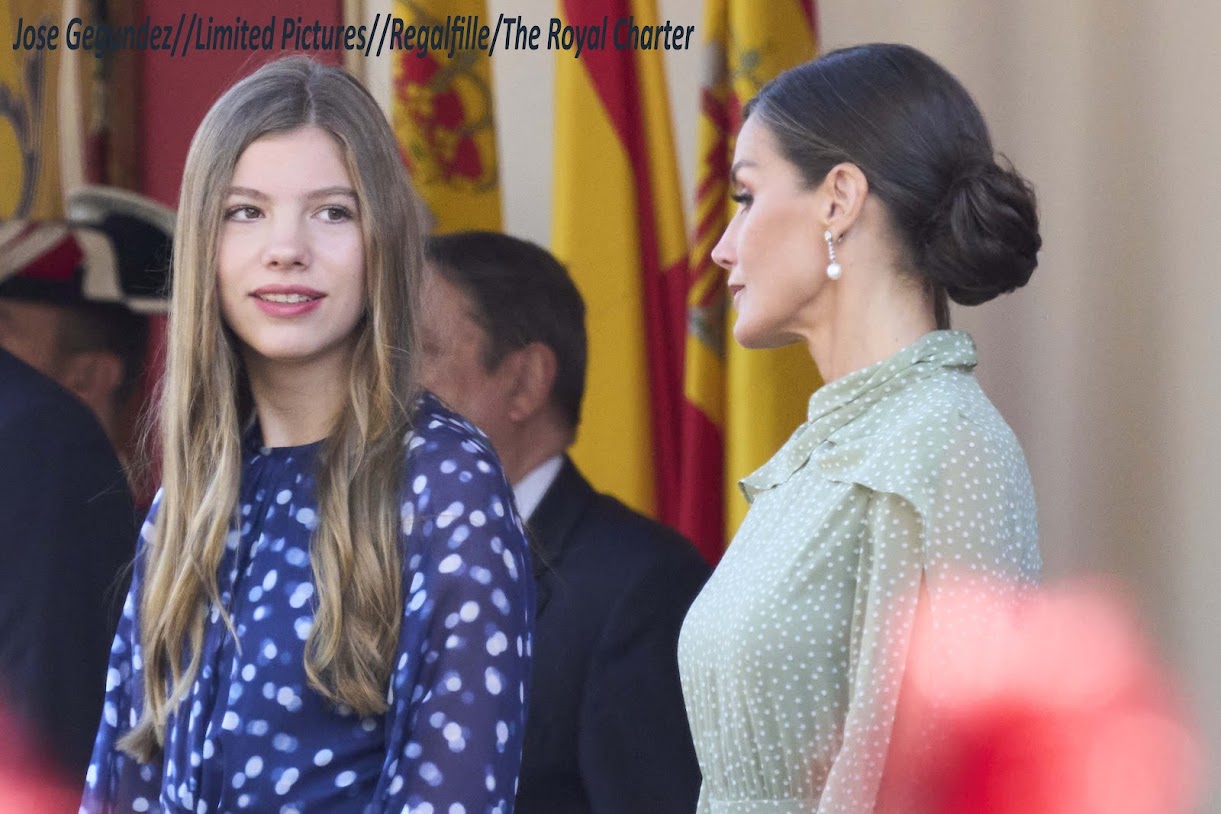 The commemoration of the National Festival aims to solemnly recall moments of collective history that are part of the common historical, cultural and social heritage, assumed as such by the vast majority of citizens. According to Law 18/1987, dated October 7, which establishes the day of the National Day of Spain on October 12, symbolizes the historical event in which Spain, on the verge of concluding a process of construction of the State from our cultural and political plurality, and the integration of the Kingdoms of Spain into a single Monarchy, begins a period of linguistic and cultural projection beyond European limits.

After the parade, Felipe and Letizia received the Prime Minister, Government members, servicemen, and women at the Throne Room of the Royal Palace.

The annual parade and reception are the staple part of the Spanish royal Calendar. 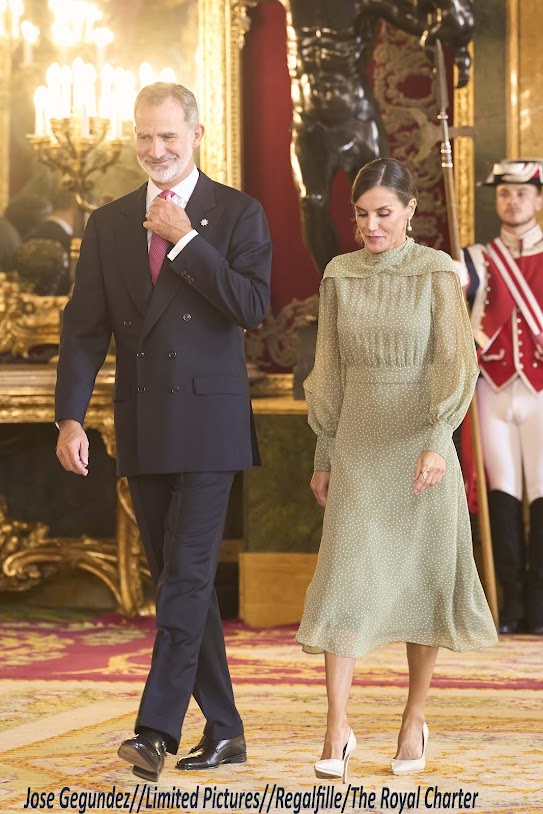 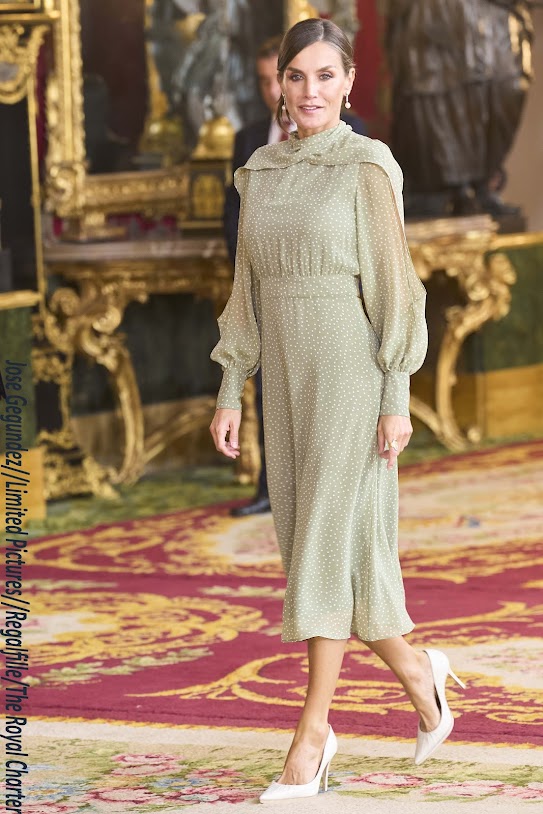 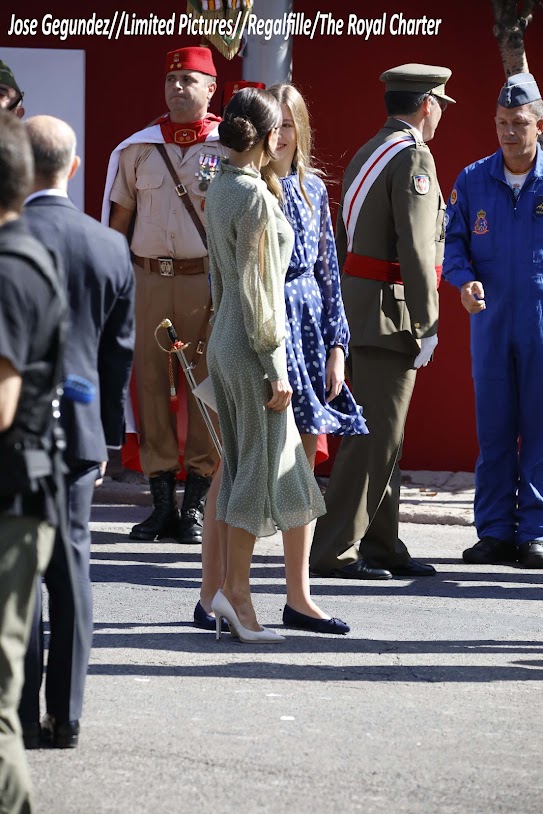 Moving towards Queen Letizia style – Letizia was looking elegant in a mint green Vogana Nanda Dress. Thanks to letizia_de_princesa_a_reina for the id.

The simple dress was described as, a “Green polka dot midi dress with cut-out detail at sleeves”. The choice of the outfit was also on par with Queen Letizia’s mission to support local brands.

and a matching Lea Clutch.

Her Australian Pearls were finishing the look of the day with her Karen Hallam ring.

Infanta Sofia was looking gorgeous in a blue Carolina Herrera polka dot dress(Thanks to letizia_de_princesa_a_reina for the id. )

A look at Queen Letizia’s previous years’ outfits at the annual day.

In 2021, Queen Letizia wore a dress by the local brand Maria Barragan.

In 2020, the celebrations were scaled-down events due to the pandemic. Queen Letizia chose to repeat her red Felipe Varela Japanese Twin Ties Coat.

In 2017, Queen Letizia of Spain chose a Felipe Varela gray-blue fitted grey jacket with a belted waist and paired it with a matching pleated skirt. 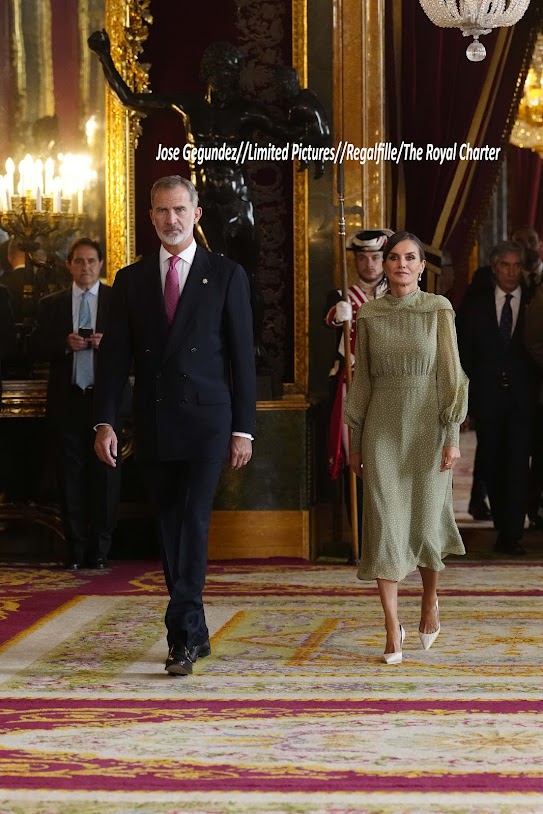 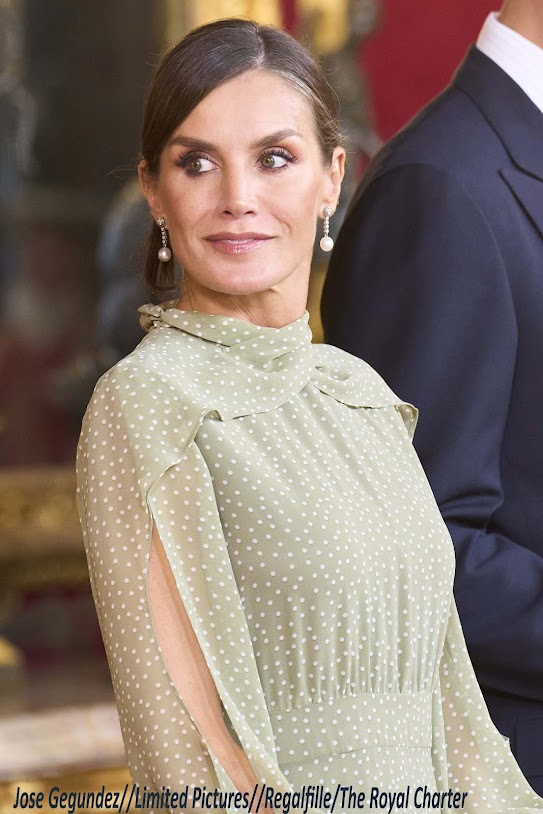 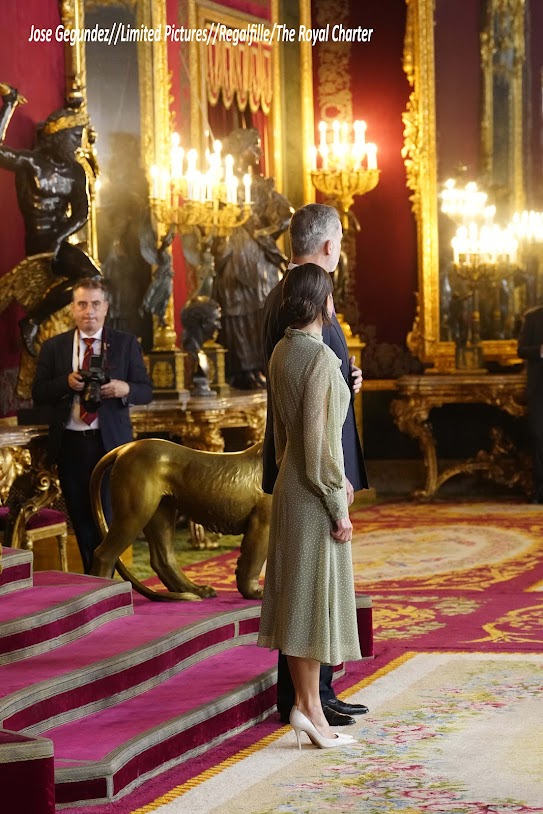 Next, we will see Queen Letizia on Monday when she and King Felipe VI will leave for Germany.