After last night’s annual Princess of Asturias Awards, today, The Spanish Royal Family headed for Cadavéu in the Council of Valdés to present the 30th Exemplary Town of Asturias Award. Another staple event in the autumn calendar of King Felipe and Queen Letizia now has become part of Princess Leonor and Infanta Sofia’s agenda too. But the family was almost an hour late for their engagement and we soon found out why. 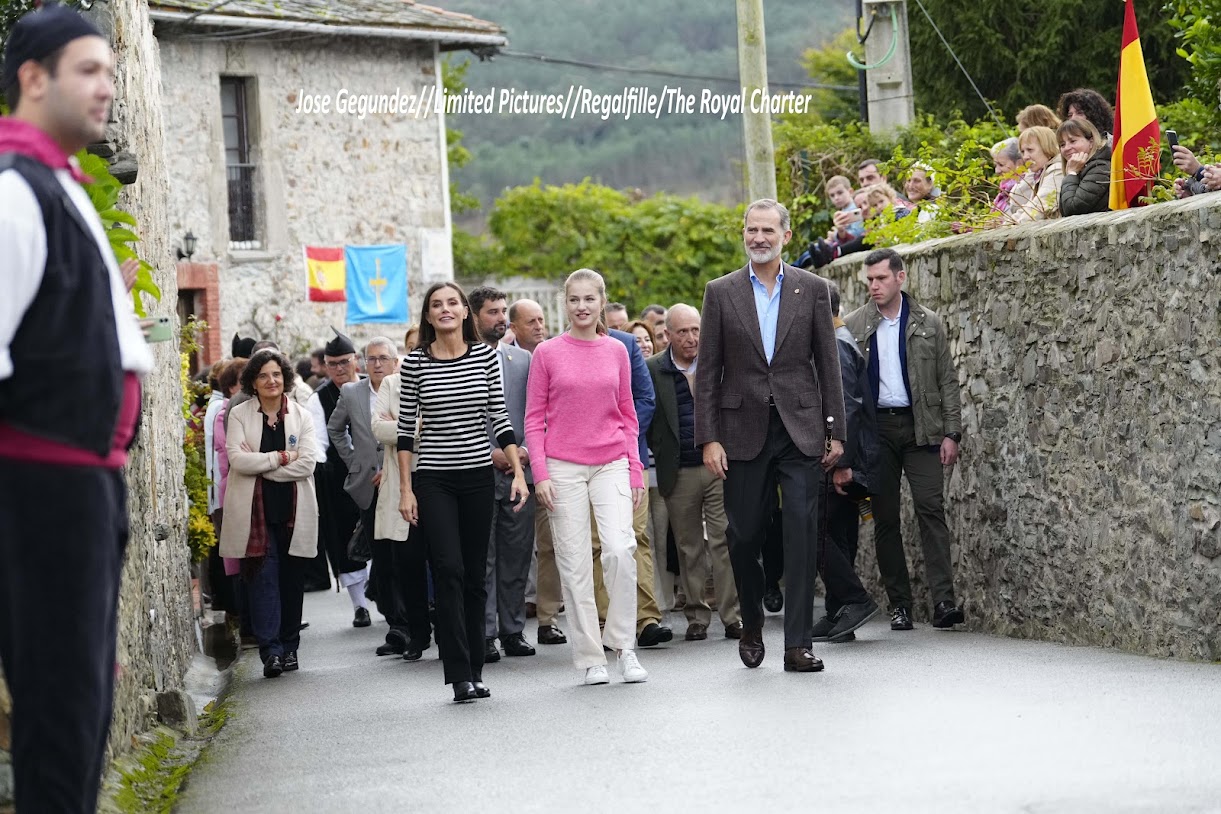 Infanta Sofia did not join her parents and sister for the day. Palace confirmed Sofia had to get out due to health reasons. So Princess Leonor alone joined her parents to walk around the streets of the beautiful town. This is the first time when Leonor has joined her parents for an engagement without her sister Infanta Sofia. It was all going well for an hour or so into the engagement.  During the middle of the visit, Leonor also started feeling sick and had to return back to the hotel. 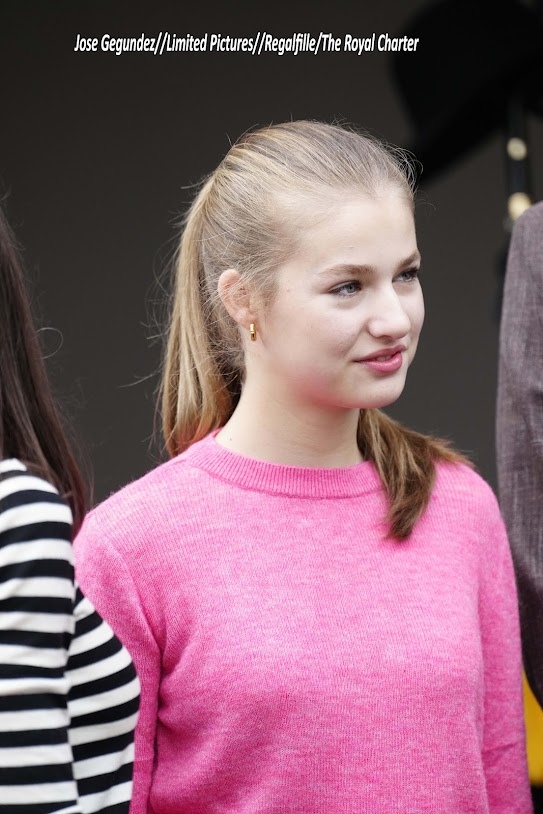 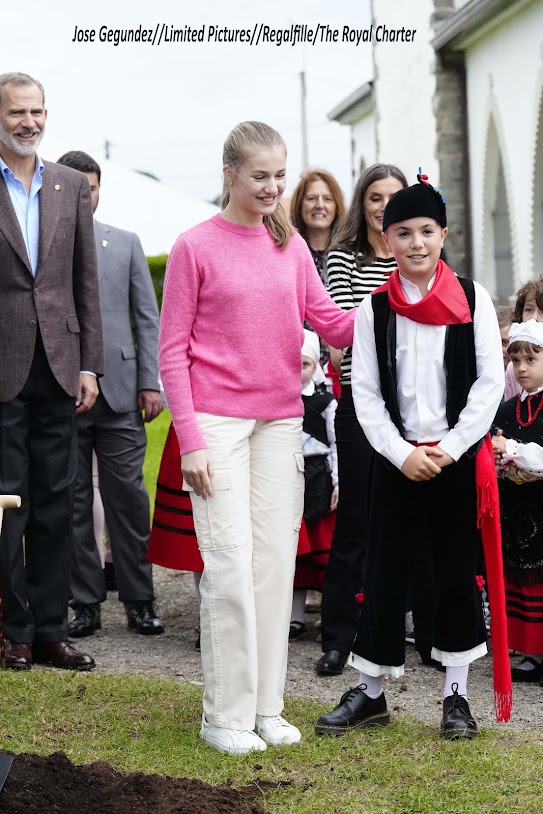 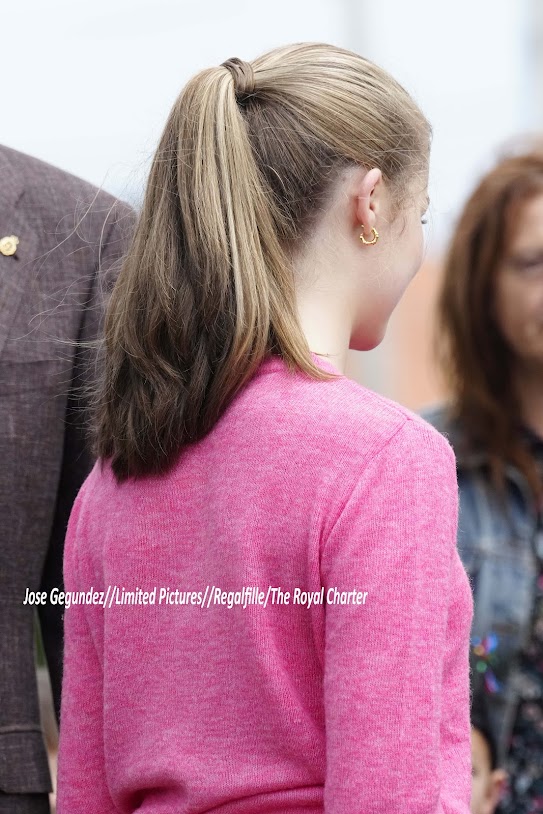 Leonor was all smiles and talkative initially. She met with the locals, hugged the local kids, planted a tree and unveiled a plaque. But then it seems she was tired and not feeling okay. Talking to the locals during the visit, Queen Letizia said “Sofia had a bad night, she tried but she could not help missing out on the day and felt very bad about it. And now Leonor is not feeling well either and had to return back. We will keep an eye and sure it will pass in the next 24 -48 hours.” Although no confirmation it seems like a case of Gastroenteritis, also referred to as ‘stomach flu’. 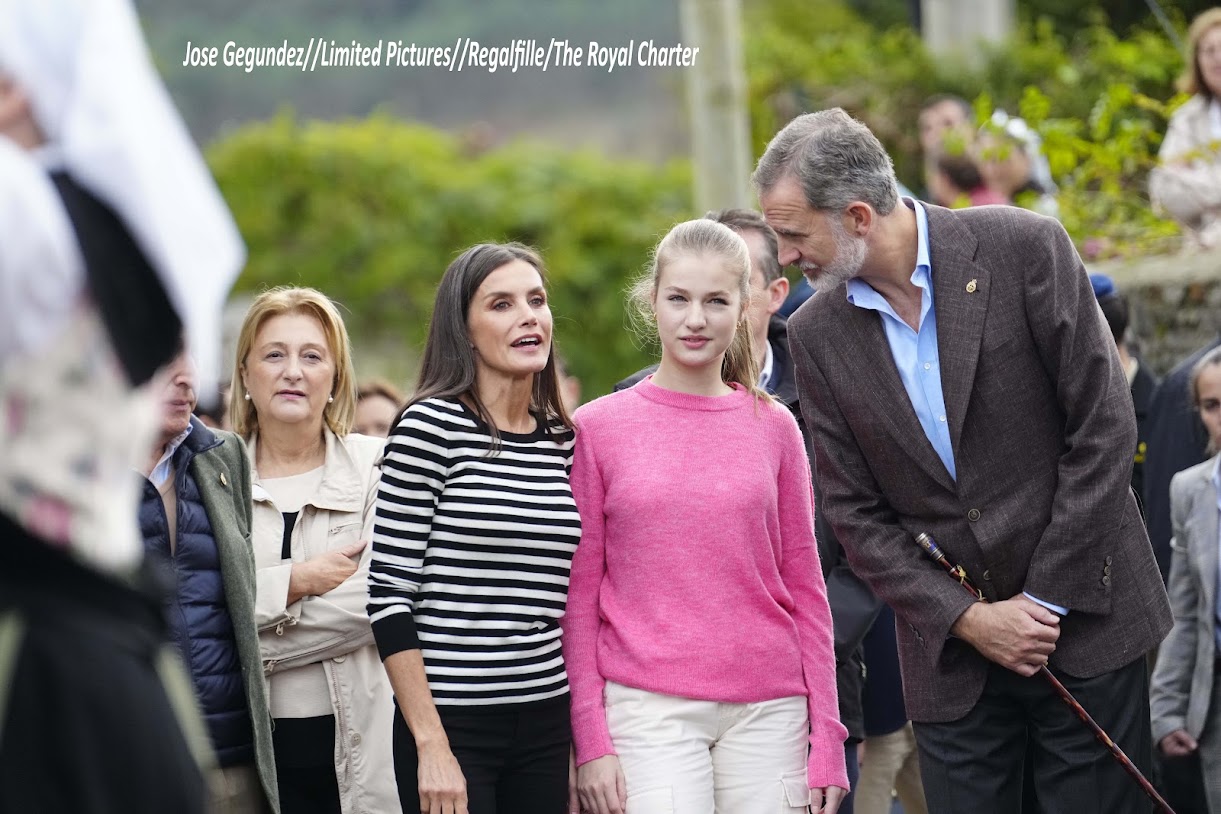 The Exemplary Town of Asturias Award was established in 1990 to mark the 10th anniversary of the Princess of Asturias Foundation and award. The award differs both in character and nature from the Princess of Asturias Awards. It is conferred on the town, village, population centre, scenic area or group of people in the Principality of Asturias that has stood out in a notable way in defending and conserving its natural or environmental setting, its historical, cultural or artistic heritage, in an initiative for boosting the economy or in the carrying out of communal works or other such outstanding displays of solidarity. The annual call for this Award has been a huge success in terms of participation throughout the region.

This year’s winner is Cadavéu  – a town in the Council of Valdés for “having known how to maintain productive diversity in rural areas, with which they have managed both to establish population and ensure generational change and for being a living and organized community”. The previous year’s winning towns included Poreñu (Villaviciosa), Mual (Cangas del Narcea), Asiegu (Cabrales), Somao (Pravia) and Santa María del Puerto,(Somied).

The jury picked the town this year for various reasons and among them, one is “the attention paid to older residents in the territory as a social value, as well as the promotion of their own culture following in the footsteps of Father Galo”. The town was picked from 27 nominations. 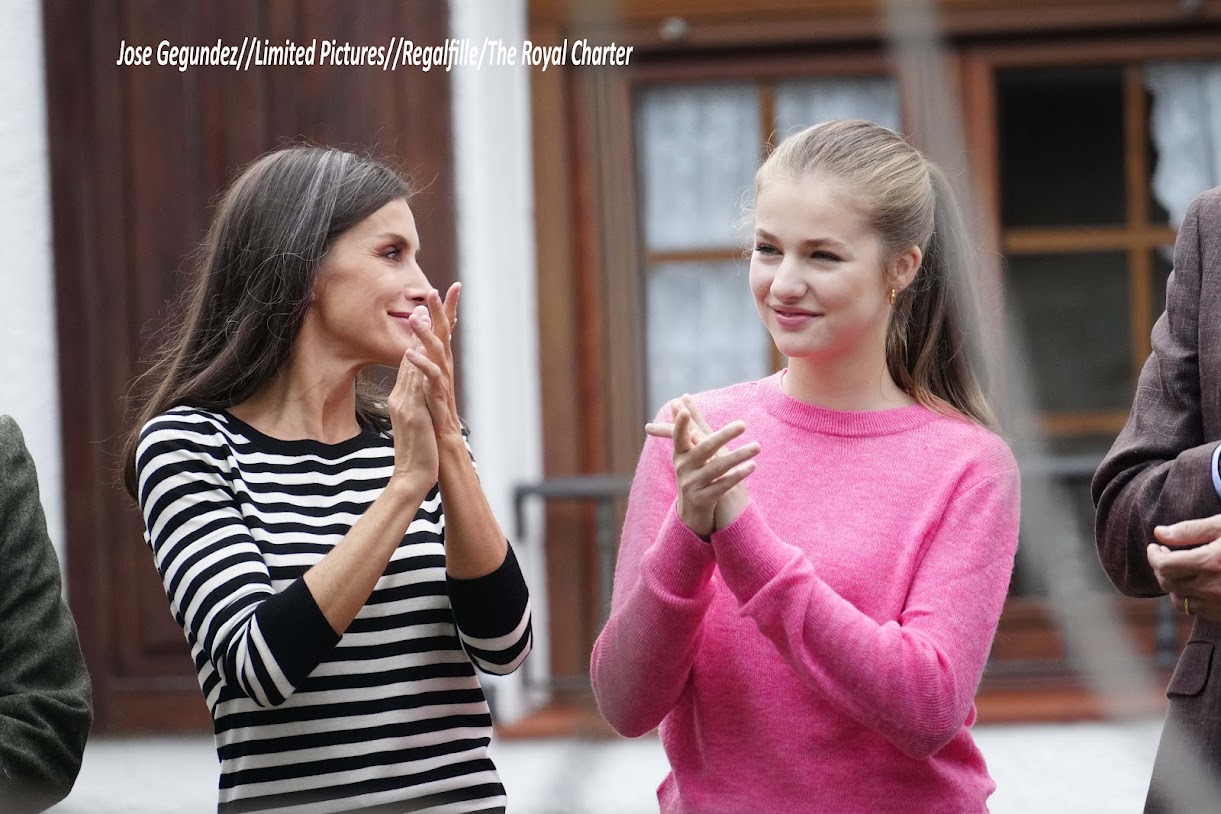 This Valdesana parish is located in the marine plain, within the Protected Landscape of the Western Coast of Asturias, eighteen kilometres from Luarca (capital of the council) and made up of the nucleus that gives it its name and the villages of Villamouros and Ribón. Its 435 neighbours maintain an open rural school (dated 1923) with increasing enrollment, and the number of residents increases in summer as it is a tourist destination with La Ribeirona beach as an outstanding natural landscape.

Primitive whaling port that suffered the Norman attack, it was a place of passage on the Camino de Santiago (de las Palancas and Real de las Ballotas) today identified as the North and has a public hostel for pilgrims. Various entrepreneurs boost the economy in which the lumber business stands out, but also metal or construction, which support the agricultural and fishing tradition. 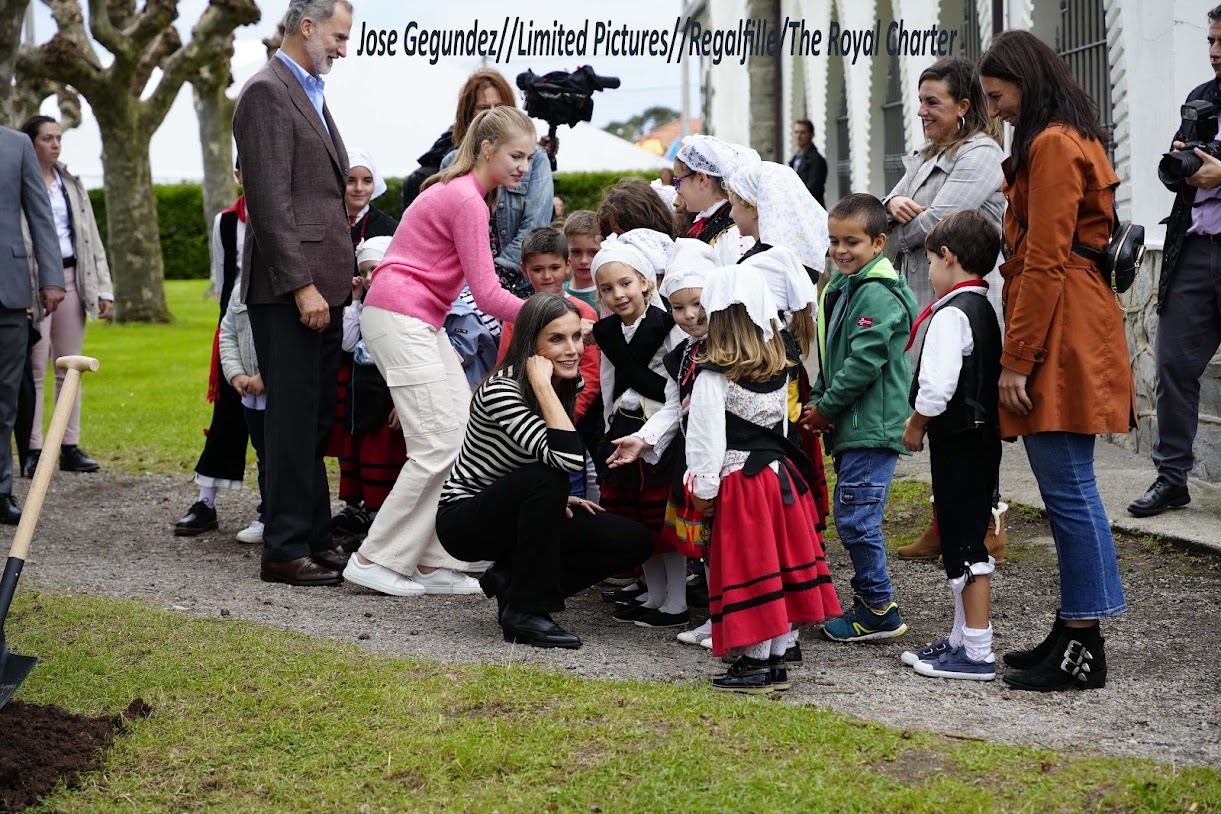 The Popular, Cultural and Recreational Society of La Regalina was established in 1953 to manage this legacy and is the hub of the town’s cultural and recreational activities (San Antonio, El Carmen and others), settling in the old Casino that they rehabilitated for this purpose. The granary of La Regalina, iconic for its position and festive role, was saved in 2021 thanks to citizen mobilization after a serious landslide. 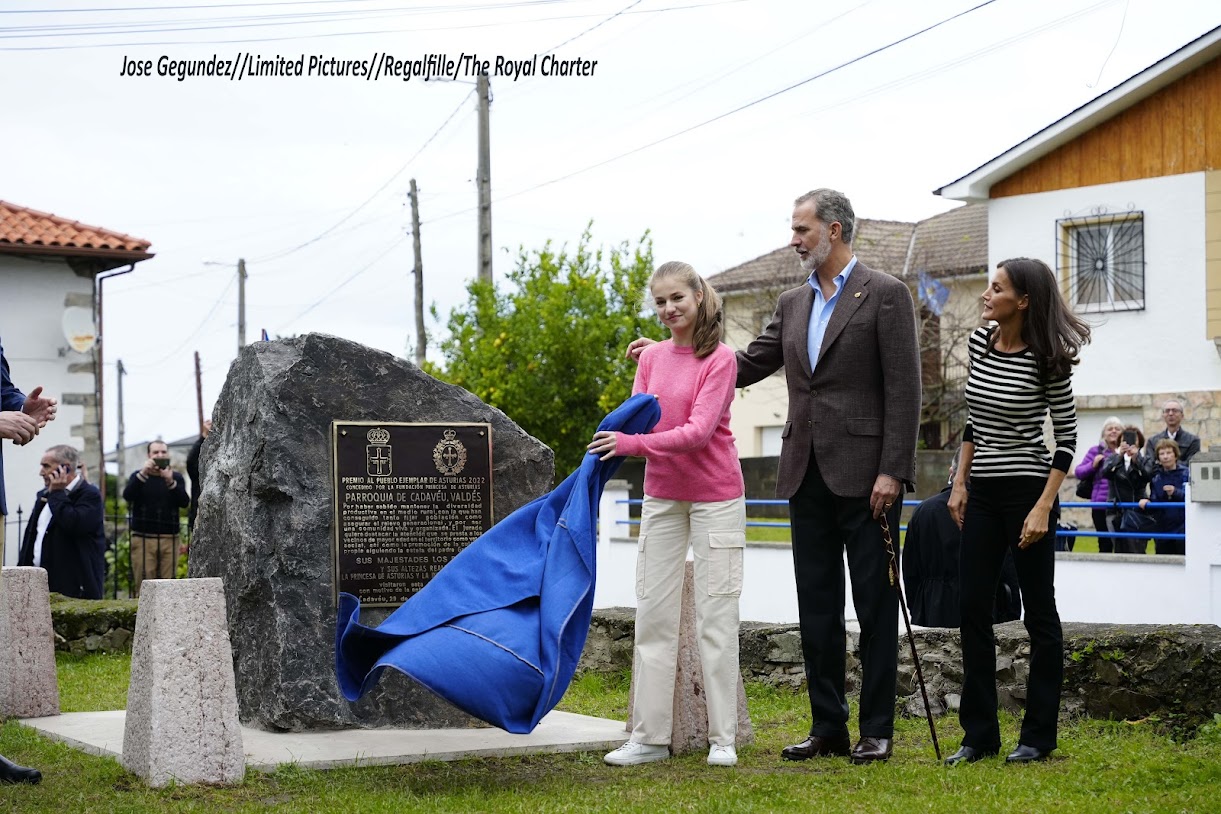 Before leaving Princess Leonor of Spain walked around the streets of Cadavéu, met with the locals and planted a tree and unveiled a plaque.

King Felipe VI, Queen Letizia and Princess Leonor of Spain visited local craft shops and various other shops and learnt about the small businesses and how are they supporting the local economy. 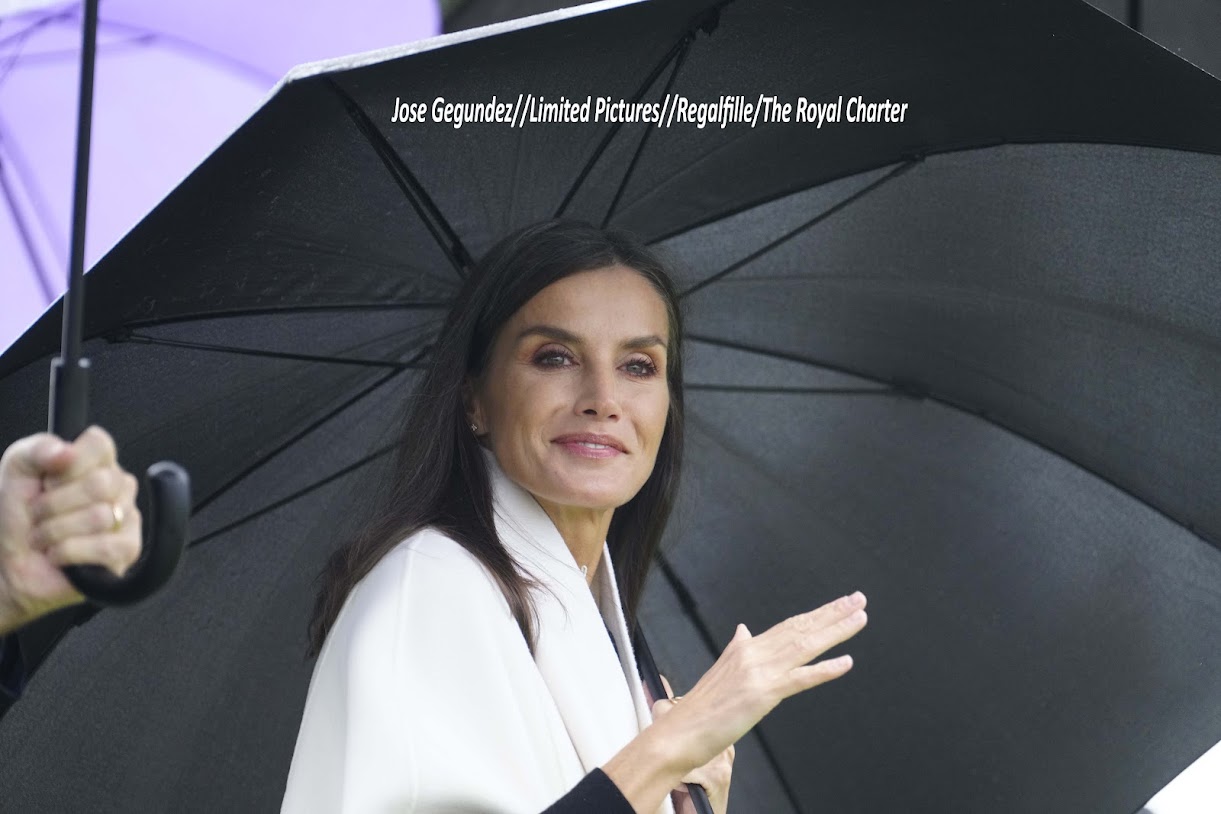 Once the Princess Left for her hotel, Queen Letizia of Spain read the speech that Leonor was supposed to give today.

And then presented the exemplary town award. 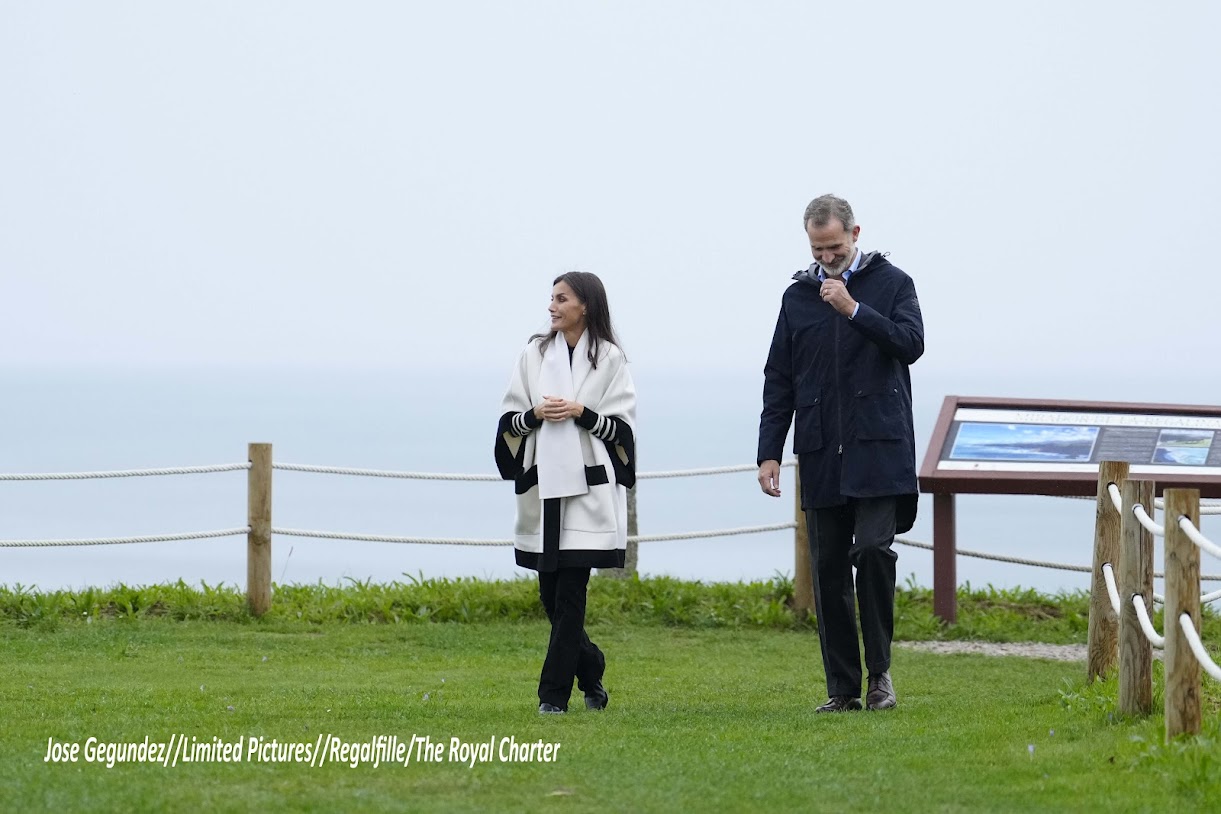 Then King Felipe and Queen Letizia continued the tour of the town. 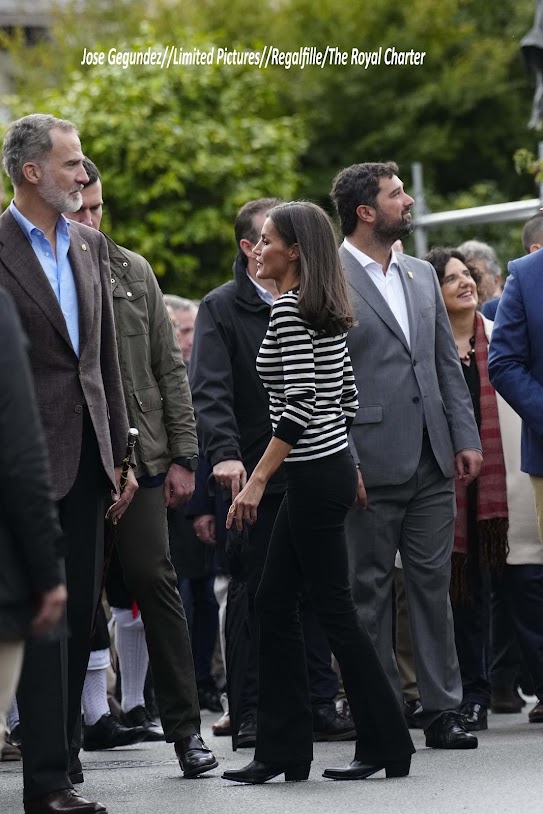 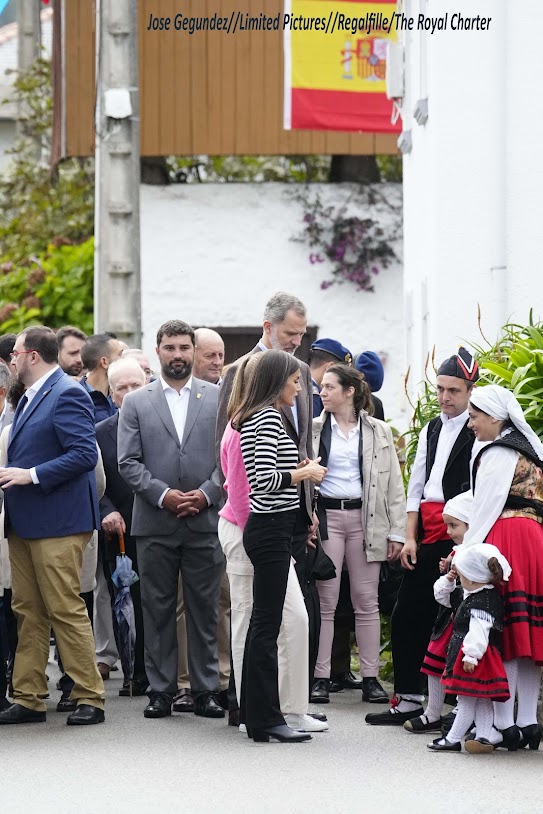 Moving towards Queen Letizia’s Style – As expected Queen Letizia kept her look chic and comfortable as the day involved lots of walking.

Queen Letizia was wearing her Hugo Boss Black & White Stripe Wool Sweater that she debuted in 2015.

She paired the outfit with a new Levi’s 312™ Shaping Slim Jeans. Thanks to Nuria for the id.

Princess Leonor kept her look chic and once again chose a fuchsia shade during the three days event and this time paired the knitted sweater with white cargo pants and her Boss kate white sneakers.