Felipe and Letizia began day 2 in Croatia with a visit to the headquarters of the Croatian State Archives, where they inaugurated the Croatia-Spain Forum IFMIF-DONES. Organized by the Ministry of Science and Education of the Government of Croatia, with the support of the Embassy of Spain in Zagreb the forum aims to highlight the IFMIF-DONES project – International Fusion Materials Irradiation Facility – Demo Oriented NEu-tron Source, and its importance as one of the most outstanding milestones in the cooperation between Spain and Croatia, in the year in which both countries are celebrating the 30 anniversary of the establishment of diplomatic relations.

Secondly, the Forum offered a solemn occasion for the signing, by the Minister of Science and Education of Croatia, Radovan Fuchs, and the Minister of Science and Innovation of Spain, Diana Morant, of the Memorandum of Understanding between Spain and Croatia that supposed, figuratively, the placement of the first legal brick in the construction of the network of mutual commitments on which the IFMIF-DONES project will be based. And, thirdly, the Forum has a very relevant business dimension, since, for the construction and operation of IFMIF-DONES, the competition of companies with a high technological profile will be necessary. Among the participants in the Forum were several companies and associations of Spanish companies.

The next stop of the day was the residence of the Ambassador of Spain in Croatia where King Felipe and Queen Letizia met with the Spanish Community living in Croatia. This sort of meeting has always been a must in Felipe and Letizia’s international visit where they meet the Spaniards living out of Spain and learnt about their lives at home away from home.

Next Felipe and Letizia have separate agendas, while Felipe visited Croatian Parliament and  Government Palace (Banski Dvor), Queen Letizia joined the First lady for a visit to the “SUVAG” – a Hearing and Speech Rehabilitation Clinic, SUVAG one of the educational institutions in which the physical activity module has been successfully installed, within of the national program “Healthy Life”.

The “SUVAG” Polyclinic was founded in 1961 as a centre for the rehabilitation and education of people with hearing and speech disabilities, using the verbotonal methods of the prestigious Croatian academic Petar Guberina, an international pioneer in the development of methods for treating hearing and speech disabilities. The acronym SUVAG means “Guberina’s Universal Verbal Auditory System”. It is a health institution that provides health care with specialized advice for people with speech communication difficulties.

After conducting their individual engagements, both King Felipe and Queen Letizia united at the Franjo Tuđman Airport in Zagreb where they bid farewell to their hosts and headed home.

For the second day – Queen Letizia kept her look simple and chic in a monochrome style. 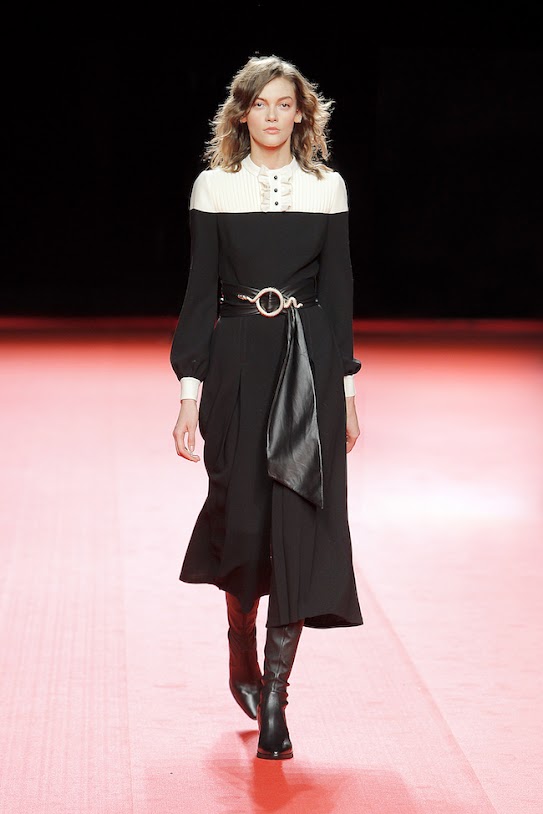 Queen Letizia was wearing a black Teresa Helbig cropped jumpsuit with white shoulder yoke detailing.  Thanks to letizia_de_princesa_a_reina for the ids.

Another look at the dress.

Another new element of the outfit was Nina Ricci’s Over-the-knee boots.  Thanks to UFONOMORE for the stock picture of the shoes.

Queen Letizia was wearing Zlatarna David ‘Barbanski rančin’ earrings that were a gift from the First Lady of Croatia.

She was carrying Adolfo Dominguez Vachetta Shoulder bag. Thanks to Nuria for the id.