Princess Charlotte of Cambridge is celebrating her 07th birthday tomorrow. Ahead of the birthday, The Duke and Duchess of Cambridge released beautiful pictures to mark the occasion. In one picture the little Princess is hugging their family pet spaniel ‘Orla’ sitting in the fields of bluebells. Orla is the niece of the Cambridge family’s English Cocker Spaniel who died last year. This is Orla’s first public appearance.

The pictures were taken by The Duchess of Cambridge earlier this weekend at the Cambridge family’s country residence Anmer Hall.

The little Princess looks so grown up in the beautiful pictures in which she is surrounded by Spring vibes. In the pictures, Charlotte is wearing Ralph Lauren Polo Cable-Knit Cashmere Sweater. Thanks to Middleton Maven for the id. 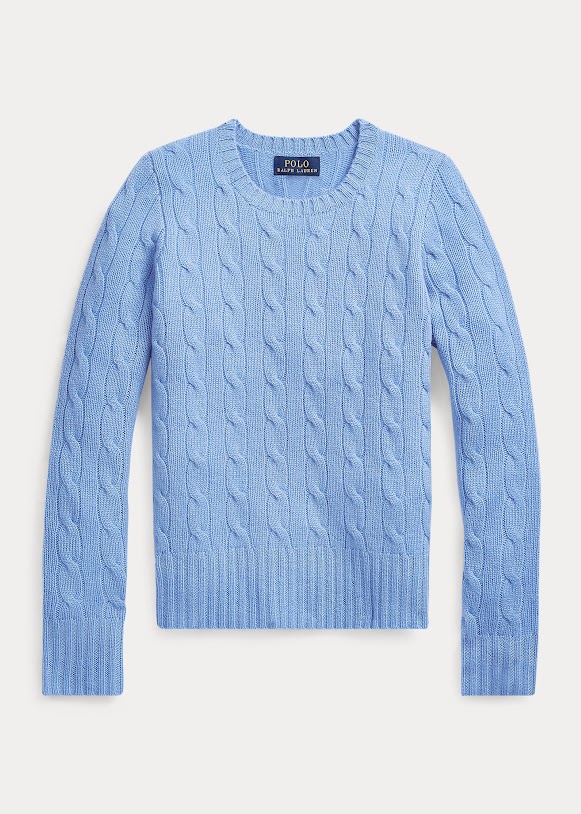 The $250 sweater was described as, “Our iconic cable-knit sweater is made from cashmere sourced from one of Italy’s most storied mills and is finished with hand-linked shoulders”. It’s currently available in 16 shades.

Underneath the sweater, Charlotte was wearing white collard Next top paired with a blue trousers. Thanks to Bojana for the id.

Charlotte Elizabeth Diana was born on May 02nd in 2015 at the St. Mary’s Hospital in London. The Duchess of Cambridge was admitted to the private Lindo Wing at St Mary’s Hospital in Paddington, west London, at 6:00 am in the morning in the early stages of her labor. Catherine gave birth to her daughter at 8.34 am.

The Little Princess is 04th in line to the British Throne. Charlotte is the firstborn royal princess who remains ahead of her younger male siblings in the accession line. Queen Elizabeth II issued a letter patent in 2012 that declares that a female heir will not be pushed down the line by the birth of a younger male sibling hence Charlotte’s younger brother Prince Louis who was born in 2018 is 05th in line after Charlotte.

Charlotte started her education at the Willcocks Nursery School, near her family’s home in Kensington Palace, in January 2018. She joined her brother Prince George at Thomas’s School in Battersea in September 2019, where she is known as Charlotte Cambridge.

The Princess made her Christmas debut in 2019 and we recently saw her at the Easter Sunday Service for the first time.  I wish the little Princess a very happy birthday!!!!

It’s been reported for some time now that The Cambridge family will be leaving their country residence Anmer Hall soon and will move to a new home in Berkshire where Charlotte will join her elder brother Prince George and younger brother Prince Louis at a new school in September this year.

The move will bring the family close to The Queen who has made Windsor Castle her permanent base and the Middleton family that lives in Bucklebury.  The Lambrook school seems to be the top-most candidate for the Cambridge kids on their parents’ list. Prince William attended Ludgrove School in Berkshire while the Duchess of Cambridge attended Marlborough College. Both were on the list but seem to be not selected by the Royal couple.